We’ve been in Easter Island for five days now.  We arrived in the anchorage outside of Hanga Roa at the crack of dawn last Thursday, after a 2055 nm (or ~3900 km) passage that took just under 16 days (15 days, 20 hours, to be exact).   We quickly cleaned up the boat and awaited the “officials”, who of course showed up right when we were eating breakfast.  At least we had showered!  Gary and I were then whisked onto the very skookum Chilean Armada zodiac to fill out endless amounts of paperwork.  We were interrogated by officials from Health, Agriculture, Immigration, Police and Navy, while the navy officials took pictures of all the documentation in our boat docs binder.  After 30 minutes of paperwork (I had to do several forms twice as I made mistakes the first time – apparently you aren’t allowed to cross things out.  What do they expect from exhausted people??) all  five officials came on board Sea Rover.  We lost a couple of sacrificial limes, but that was it.  Overall, it was pretty painless.

We’d manage to arrive during the last few days of the Easter Island Tapati festival, which occurs the first two weeks of February every year.  It is a big festival that celebrates the culture of Easter Island.  All 8000 inhabitants of the island participate. The day we arrived was their big parade, so we forewent sleep and went into town to see the festivities.  We’d been told by numerous people that the parade was supposed to start at 5pm, so we found a nice place to watch from at about 4:45.  Then we waited, and waited, and waited some more.  Island time.  It turns out that 5pm actually means 8pm!  But, we met some nice people from the Netherlands while waiting, and we spent time talking to the crew of s/v Elcie, who we’d met in the Galapagos and who arrived a couple of days before us.  The parade was worth the wait.
As far as we could make out, the parade is the final event in choosing the Queen of the festival.  There are two ‘princesses’ who vie for the honour, each of whom is supported by their families.  Part of the parade is that the families try to recruit people to join their “camp”.  Each person gets dressed up (or should I say dressed down?) in costumes made up of corn husks, shells, beads and banana leaves.  It is amazing what you can do with natural ingredients.  And did I mention that all the people get painted in brown paint and body paint designs?  What is so amazing is that everyone from the whole island participates.  Everyone from each “camp” then performs songs and dances during the parade.  Incredible.  The ‘camp’ with the most followers wins.  In addition to the singing and dancing, there are a number of floats with the most amazing wood carvings.  I’m sure the whole parade told a story, which we would have understood if our Spanish was better, but it was pretty neat as is. 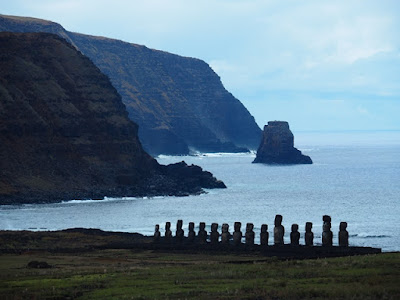 We rented a car for two days over the weekend to explore the island.  I can safely say that we have now driven every road possible on Easter Island.  As the island is basically a triangle of 8 km x 12 km, this isn’t really hard!  But, when you stop every kilometre or so to look at a cultural site, it takes some time to make it around the island. 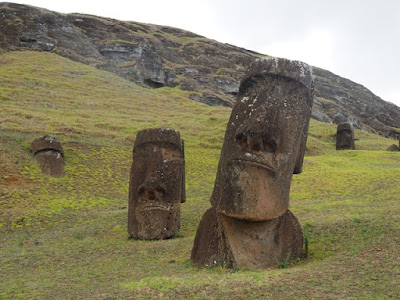 We’ve now seen Moai’s (the stone statues) that are face down, face up, in rows, facing the sunset, etc.  We also visited the quarry where all the Moai’s were carved from.  What is really neat is that the hillside is dotted with Moai’s all buried at different levels.  Some have only their heads showing, some their heads and torsos, etc.  Apparently they would do the rough carving of the Moai’s from the rock in the hillside, then they’d lower them down into holes in the hillside.  If they were working on the face, they’d bury the Moai up to it’s head, and if they were working lower down, they’d leave more exposed.  All in all, it was pretty incredible to see. 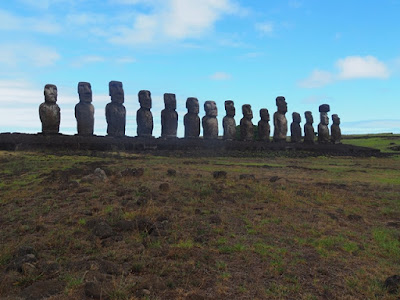 It has been a neat experience being here as it is such a small place.  There are lots of tourists around (mostly Chilean), but the place doesn’t seem overrun.  It is VERY expensive though.  Prices are 2-3x higher than in Canada.  We took some laundry in to get washed and it was $5 a kilo.  What cost us $12 to get done in the Galapagos cost us over $50 in Easter Island!  Everything is expensive – food, eating out, goods etc.  The only thing that has been semi reasonable so far was fuel.  That seemed to be about what we pay in Canada. 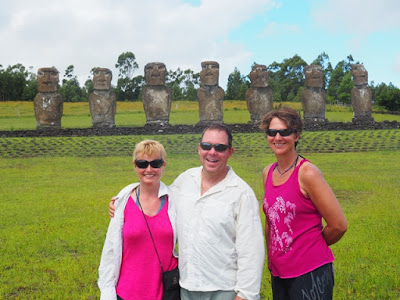 Also, the anchorage here leaves a bit to be desired.  It is a very open roadstead, with absolutely NO protection from anything.  We are basically being pummelled by waves that come from New Zealand.  We didn’t get much sleep the first night as the boat literally rolled rail to rail.  It was worse than being offshore!  Our poor flopper stoppers basically do nothing.  We’ll definitely have to go back to the drawing board to make some improvements on them this summer.  We put out a stern anchor first thing on day 2, which worked really well until this evening last night when the rode decided to get stuck in a rock.  We’ll have to either rent dive gear today or pay for someone to dive down for us to get it unstuck.  Joy.  We’ll get it up, but definitely a pain. 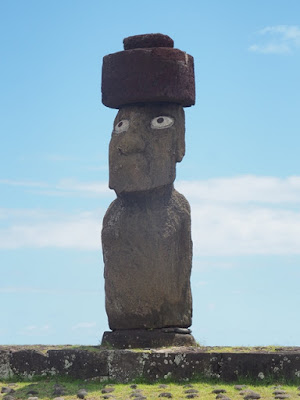 Speaking of offshore, we’ll be leaving here for the Chilean mainland on Thursday (tomorrow).  A weather window is opening that we need to take advantage of.  We’ve decided to hire a weather router for this leg as the weather looks “dynamic”, to steal a word from Richard on s/v Elcie.  We will be using renowned weather guru Bob McDavitt from New Zealand to help us get there safely.  So far he is seeing what Gary is seeing, so that is good.  We have also made a decision on where we will keep the boat over the summer.  We managed to get a reservation to haul the boat out of the water at the Yacht Club in Puerto Montt.  So Puerto Montt it is! We’ll try to post to the blog along the way, but don’t worry if you don’t hear from us for a day or two ‘– conditions aren’t always conducive to spending long periods (or any period) of time down below.  We’ll keep the tracker going though, so you can follow us on that.  If we disappear briefly, wait 30 minutes and look again – apparently the satellites don’t always line up perfectly down there and there can be gaps.