The Return to Sea Rover II – Part One

Four days, four flights, two PCR tests, eight serious document checks, many hours of lining up, thousands and thousands of encounters with people.  But we are in Puerto Williams, Chile, on our sailboat!!

It has been a long time since we’ve updated this blog – 21 months, in fact.  As with many people around the world, in March 2020 we found ourselves away from home and away from our boat.  We’d taken a Cruise to the Falklands/South Georgia/Antarctica at the beginning of the month, sailing in and out of Ushuaia, Argentina.  Due to the imminent locking down of all the countries in the world, the Cruise was cut short as they raced to get us back to Ushuaia before the world shut down.  We arrived back in Ushuaia on March 16th – unfortunately the Chilean border shut on March 15th.  So despite being only 25 miles away from our boat, we had no way to get back to her.  Once we realized that COVID wasn’t going to go away any time soon, we pivoted from trying to get back to the boat and concentrated on getting home to Canada.  After a few tense days with borders closing and flights being cancelled, we caught the 2nd last Air Canada flight out of South America on March 20th.  And then the wait began...

Like a number of countries in the world, Chile closed their borders to all foreigners.  The border opened for about a month in early 2021, only to quickly close when cases began to rise in the country.  Fast forward to November 1st, 2021 when Chile finally announced opening of the borders to fully vaccinated foreigners.  With conditions.  We booked air tickets and started the process of getting permission to enter the country.  We had to first apply for what the government calls a “Mobility Pass”, where we had to send proof of our vaccinations and proof of medical insurance.  After two weeks of scrutinizing the documents, we received our Passes from the government, conditional on having a negative PCR test upon arrival in the country.  The trip south was a “go”.

After closing up our house, we boarded the red-eye to Mexico City on November 26th.  We had no trouble clearing into Mexico as they have no COVID restrictions.  The 2.5 hour wait to clear into the country at Immigration was just like any other year. People are clearly travelling again!  After a 12 hour layover (and a very stressful negotiation with the airline staff regarding our documentation – they didn’t think that the fact that my health insurance says that we are covered for “all diseases” included COVID…) we boarded the 8 hour overnight flight to Santiago.  After arriving in Santiago, we blearily stumbled off the plane Sunday morning and got in the first of many lines we would stand in that day.  Chile has very strict entry requirements and as such, have had to set up the infrastructure to support it at the airport.  The first line was to have our documentation checked (ie, PCR tests, affidavit stating where we would quarantine, Mobility Pass, proof of health insurance).  There were 100 kiosks set up (85 of which were staffed).  We made our way down the line and were eventually sent to one of the kiosks to undergo interrogation #1.  We got lucky and the person we dealt with was friendly and helpful.  It turns out we had filled our affidavit out incorrectly, but she just updated it with our hotel address with no fuss.  She then explained the quarantine system to us and sent us on our way.  One down.  Next we got in line for our PCR tests.  We eventually made our way to a set of electronic kiosks where we entered our info and were issued a sheet with the information required for our PCR test.  Back into another line.  We finally made it to the end of the line where our document for the PCR test was examined before sending us off to one of 60 individual testing rooms set up in the entry hall.  After the PCR test, we moved on to the Immigration line.  Since foreign travel is difficult, that line was relatively short.  After getting our 90-day tourist visas, we were finally allowed to collect our luggage and go through customs.  Happily the two Labradors patrolling the customs line did not target our stack of granola bars and we did not have to go through secondary inspection (another spot of luck).  So, 2.5 hours after we landed we were out of the airport!  We caught the free shuttle to our hotel to complete our quarantine.  We had showers and then slept for the next 7 hours. By the time we woke up, our PCR results had come back negative, meaning the end of quarantine and the activation of our Mobility Passes – just in time for dinner!

We stayed at the hotel on Monday as we couldn’t get a flight down to Puerto Williams that day.  At 4am Tuesday morning, we arrived at the airport and were astounded to find 3000 other people all trying to check into their flights.  It was nothing short of a gong show.  After an initial panic thinking we had to stand in a lineup that was literally 500 people long, we found the correct (and much shorter) line and waited to check in.  We made it to the front of the line in an hour and successfully checked in with our Mobility Pass and Sunday’s PCR test.  As it was the first test of the validity of the Mobility Pass, we were relieved that the check in was smooth.  We had a bumpy flight to Punta Arenas, then had to show our PCR results to get off the plane.  We checked in for our flight to Puerto Williams. We had to show the Mobility Pass and PCR results while standing in line to check in, at the check in desk, and to get on the plane – no one says the Chilean’s aren’t thorough!  The flight into Puerto Williams was awesome.  The plane is a 19-seater Twin Otter.  We sat right up at the front and enjoyed the views of Tierra del Fuego.
We had a great view of the Micalvi, where Sea Rover has spent the last 21 months, while landing.  We were hoping to catch a taxi at the airport, but I don’t think Puerto Williams is big enough to have one.  While we were standing outside trying to figure out whether someone could pick us up by boat (the airport is directly across the inlet where the marina is located), a couple of the airline employees came out and offered us a ride.  So, we met a couple of the locals.

We made it!  With some trepidation we got on board the boat…and were pleasantly surprised.  She actually looks pretty much how we left her.  More dirt, the dinghy was deflated, our gear tarp was pretty threadbare, but the canvas cockpit enclosure looked good and everything was right where we left it.  There was a bit of mold and things definitely smell musty, but so far so good.  We plugged in, got some water in the tanks, hooked up the propane and started to unpack.  So far we’ve sorted out the internet, bought a bit of food and sorted some of our clothes.  We haven’t looked at the batteries yet or tried to start the engine, so there are still a LOT of unknowns, and we really don't know what we are in for.  The next few days will determine what our future looks like...  Stay tuned for Part Two. 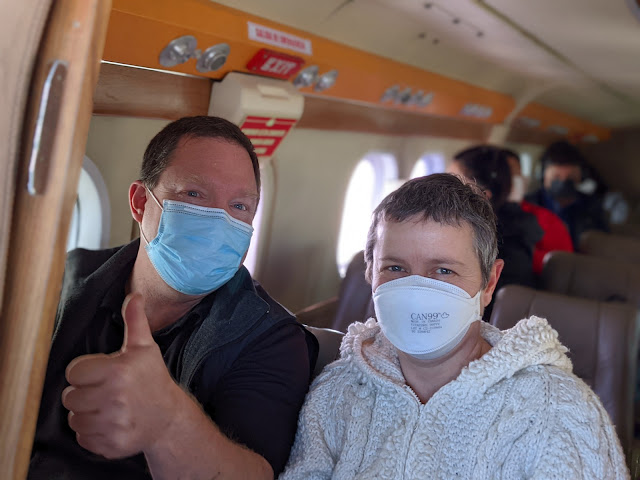