Ten days ago we did a 3-day, 320 nm passage from La Paz to a tiny island off the coast of mainland Mexico called Isla Isabel.  Unlike our first passage across the Sea, this one was almost pleasant.  Almost.  We thought we’d picked the perfect weather window.  The “Fast Sea” weather/passage planning software we were using predicted we’d have no more than 16 knots of wind from the NW and small seas for the entire crossing.  That was once the cold front that was travelling down the Sea of Cortez had passed, which it was supposed to do the morning we left…BEFORE we left.

The first 12 hours of the passage were pleasant.  We did indeed have 15 knots of wind and had a beautiful sail down the Cerralvo channel.  Just after nightfall, after we’d left the safety of the Baja coastline, we looked behind us and saw a sight guaranteed to strike fear into the heart of any offshore sailor.  Lightening.  And LOTS of it!  Unfortunately I had just put lasagna in the oven for dinner and so we weren’t able to put our spare GPS and radio in oven (our faraday container on board) to protect them in the event of a lightening strike…

With no choice but to carry on, we reefed the main and watched the squalls form all around us.  At one point we were in the centre of 5 different squalls, with lightening hitting the water all around us.  It was nothing short of terrifying.  By midnight the thunderheads had moved off to the east, but the wind climbed to 30 knots and stayed there for the duration of the night.  We sailed with just a double reefed main and made amazing progress.  So much for the “Fast Seas” prediction.  By morning we were 12 hours ahead of where we were supposed to be by their calculations!

Days two and three were much tamer.  The seas were still big, but the winds were a gentle 10-15 knots.  Unfortunately we ended up travelling too quickly and our arrival time to Isla Isabel showed after dark.  We slowed the boat way down and sailed at 1.5 knots for the last 15 miles so that we pulled into the island at first light. 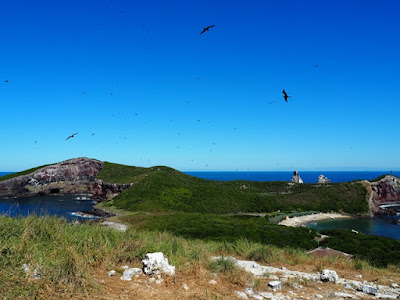 Isla Isabel was spectacular.  The first thing that hit us was how green it was!  I don’t know why that surprised us so much, but after sailing in the Mexican desert for the last 2 years, you get used to seeing brown, not green.  The second thing that struck us was the birds.  There were literally thousands of frigate birds and boobies circling over the island.  Talk about wild.

The island has 2 anchorages, one on the south side, and one on the east.  Neither is tenable in anything other than calm seas.  The seas were definitely calming down when we arrived, but the breakers rolling across the south anchorage and crashing into the rocks were humbling, to be sure.  We anchored in the south bay.  As the anchorage is known to have a rocky bottom that has “eaten more anchors than anywhere else in Mexico”, we attached a trip line and Gary got in the water and manuevered the anchor into a favourable sandy spot (there is only one – the joy of being the first boat to arrive!).

Despite only getting snatches of sleep for the last 3 days, we put the dinghy in the water and went to explore.  The island is called the Mexican Galapagos as the inhabitants have no predators and so aren’t afraid of people.  As a result, you can get up close and personal with frigates, iguanas and nesting boobies.  It was incredible. 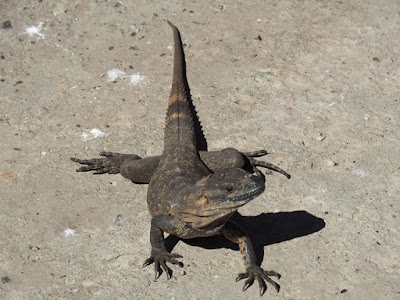 People must feed the iguanas, or they just like the camera, because they literally ran up to me when I knelt down to take pictures.  You had to watch where you stepped in the grass to avoid squishing them!

The Boobies were the most amazing though, as we’d arrived at nesting time.  We hiked to the top of a ridge overlooking the anchorage, and there they were, nest after nest of boobies sitting on their eggs.  They watched us wearily as we walked slowly through them, but they didn’t leave their nests and didn’t seem put out by us at all.

The highlight was watching a pair building a nest.  The male would gather grass then prance over to the nest and place it around the female.  They’d then click bills and cackle at each other.  It was adorable.  I got the most amazing video.

The island itself is a national park and was home to an impressive looking research station which was built in 1980, but like so many buildings in Mexico, has fallen into disrepair.  Supposedly researchers still go there and camp in the abandoned building, but no one was present when we were visiting.

The island is also home to a well-run fish camp.  The Mexican government must have built the huts on the beach at the same time as the research centre, as they are identical and are painted green to blend into the background.  It is a very active camp, which houses the long-line fisherman.  The fisherman go out and set lines with thousands of hooks on the surface, marked with pop bottles, that go for miles.  Each end is marked by a pole with a black flag.  We regularly saw the fishermen going out with nets full of pop bottles and reels of line wrapped around the poles.  While we were impressed at how hard these men worked, we were saddened by their impact on the ocean.  These longlines are extremely hazardous to by-catch (dolphins, turtles, whales), not to mention sailboats trying to traverse the area!  We caught one on our passage from Isla Isabel to the mainland, but luckily it came off with a bit of coaxing.  As you traverse this area of the coast in a sailboat you can’t help but feel like the ocean has been booby-trapped.  But, I understand people have to eat and it isn’t a simple problem and doesn’t have a simple solution.  Like so many things in life. 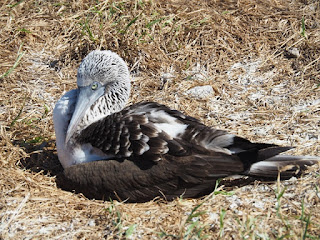 After spending two lovely days soaking up the atmosphere on the island, the wind and waves picked up and it was time to go.  We had a pleasant overnight sail to La Cruz, in Banderas Bay (Puerto Vallarta) and spent a few days catching up with friends and enjoying the Cruiser activities (Movie Night, Cruiser Welcome Party etc).

We weren’t planning on going that far south before Christmas, but Gary wanted to do a reconnaissance trip as he will be single-handing the boat back to this area in January while I am in Vancouver working.  After 2 days there, we took advantage of the calm conditions to motor (with some sailing) 60 nm north to the town of San Blas, where we will keep the boat over Christmas while we return to snowy, cold Vancouver.  I expect it will be a bit of a shock for us on Friday when we travel from our current jungle/river area location where it is 30oC and humid (we are both dying) to -2oC (we will also be dying).

Here are a few more pictures of the inhabitants of Isla Isabel:

Posted by Gary and Karina at 8:19 PM No comments: