Making Sea Rover Legal and Putting Her to Bed 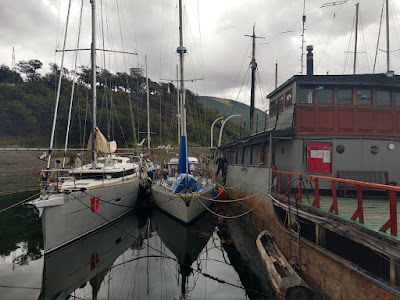 We sailed back to Puerto Williams and were directed by the Navy to anchor just off the Micalvi to wait out our quarantine over the weekend. On Monday morning we met Natalia at the dock where she administered another antigen test under the watchful eye of the Navy. After receiving the all clear, we checked back into the country and obtained our new boat visa. We are good for another 2 years. Getting the visa sorted out was a hassle, but we are very glad we did it. The irony of the whole thing was that they opened the port in Puerto Williams 2 weeks later, not that it would have necessarily made the whole process any easier. From what we could tell it just made the quarantine period go away. 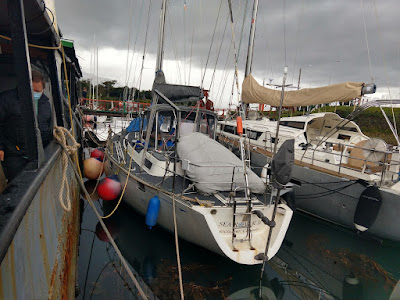 We spent the last few weeks doing some boat projects (installing an antenna mast, running antenna wires, installing new solar panels) and putting the boat to bed for the season. We managed to score a spot on the inside of the Micalvi this year. As the inner bay is narrow and shallow only 2 boats can raft. We are still tied up directly to the Micalvi, but we only have 1 boat attached to us versus 7. Plus the prevailing wind will push us off the Micalvi instead of onto it.
That's if for us for the next few months while we return home to make our house habitable again...
Posted by Karina McQueen at 9:56 AM 4 comments: