Gary's mission any time the boat moves is that we MUST sail at least 60% of the time.  He is quite obsessive about this.  As you can imagine, he didn’t appreciate the calm weather we had during Neil and Maureen’s visit at the end of February as much as I did.

So, when we left La Paz for our trip up to Loreto two weeks ago I knew we were in for an uphill ride – literally. 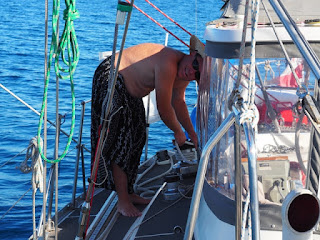 The uphill journey began immediately.  No sooner had we pulled up the hook when the winds filled in for a nice close hauled sail up to Isla Espiritu Santo.  We had planned on stopping for the night and enjoying a few days in the islands, but calm seas (and no wind) were forecast for the next couple of days.  However, a light westerly wind was forecast for the night and so we changed gears and made plans for a slow overnight sail to Isla San Francisco 25nm away.  It was actually a lovely sail.  While I got some sleep, Gary deployed the spinnaker and enjoyed the incredible bioluminescence and the million stars in the moonless sky.  It was so calm and glassy you could hear whales breaking the surface miles away and dolphins circling just out of sight.   We glided into the anchorage at 3am and anchored amongst 18 other boats.  Mission accomplished on leg one.

After enjoying a few days snorkeling and hiking on Isla San Francisco with our friends on Kialoa and Greybeard, we headed north on leg two of our voyage north.  We motored in flat calm seas (and no wind) to the next anchorage and enjoyed exploring the nearby mangrove lagoon for a couple of hours.  Surprisingly, a SOUTH wind started up in the early afternoon.  Instead of staying for the night as planned, we pulled up the hook and had a glorious downwind sail through San Jose channel.  Mission accomplished again on leg two.

Leg three began the same way as leg two – motoring in no wind.  This lasted for about an hour before the wind picked up to 4 knots.  Then we had to sail.  While Kialoa and Greybeard decided sailing in 4 knots was retarded, we sailed slowly (and I mean slowly…) north for the next 4 hours.  We (ie, Gary) finally gave up when it was so calm I agreed to jump off the boat in the middle of the sea to go for a swim.  Mission only sort of accomplished for leg three as we managed to sail 10 out of  the 22nm.

Leg four got an unexpected start when we got up to watch the sunrise and realized there was a bit of wind.  While still in our pajamas we hoisted the anchor and set sail.  The wind didn’t last long, but it did get us half way to our destination 9nm away.
Leg five was supposed to be a complete motor as there was absolutely no wind forecast.  Of course it turned out to be our craziest sail of the trip.  We had planned on an early start but Gary didn’t want to leave as there was no wind.  After twiddling our thumbs for an hour, we motored out of the bay in calm conditions.  Then we turned the corner and were pleasantly surprised to find it blowing about 12 knots.  We sailed close hauled for half an hour or so before Gary decided he needed to put sunscreen on.  As he was doing that, I went downstairs to ensure all the port holes had been closed (which was incredibly lucky as it turns out we had missed one).
As I was down in the cabin it seemed like we were starting to heel over more than expected.  The next thing I knew I’m crawling up the floor trying to stuff our entire alcohol supply back into the liquor cabinet.  I yelled up the companionway to Gary to “do something”.  He stared down at me while waving his hands in the air and mouthed something at me that was lost in the now howling wind.  I scrambled up into the cockpit and realized the wind had increased from 12 to 25 knots in the 2 minutes I’d been downstairs!!  I shot Gary the “why the F@#% haven’t you started to reef the boat” look , when he held his hands up again and calmly told me he couldn’t touch anything as his hands were too slippery from all the sunscreen!  After 10 minutes of chaos we got the boat under control again (double reefed main, triple reefed genoa) and turned around to head back to the anchorage we’d just passed.  The conditions started to moderate as we got closer to land, so we turned the boat around again and decided to try heading north to our original destination.  We ended up sailing the whole way in pretty much every condition.  Mission definitely accomplished for leg five. 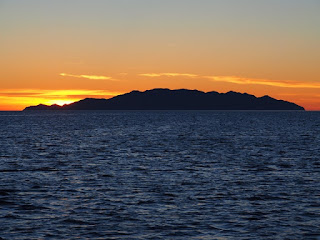 Leg six turned out to be more of the same after sitting out a three day blow.  We left the anchorage expecting to motor 10 nm north up to the next bay.  Piece of cake.   Conditions were fine when we left the bay but quickly deteriorated to 4-5 foot seas spaced as close as I’ve ever seen them.

Unfortunately the wind was all over the place.  First there is no wind, then there is 18 knots of wind.  So we reefed.  Then we un-reefed.  Then we reefed.  All the while bashing into waves that are pretty much continually swamping the deck.  Then we heard friends of ours calling on the radio.  We could barely make out what they were saying over their screaming and the wind noise, but we learned they’d just left the bay we were going to and had encountered wind gusts of up to 40 knots!  Even though we were only 6nm from our destination, we turned around and sailed 25nm around the island to the next anchorage.  We sailed 100% of this one, 90% of which was upwind.  As I made the call to turn around, Gary says this one was on me.  Mission accomplished times 20 for leg six.


We arrived in our present location last Thursday and haven’t felt the need to move.  The anchorage is lovely.  As we can see the lights of Loreto from where we are sitting,  we are getting TelCel coverage here and somewhat spotty internet (but it is internet).  I’ve been able to do work, and we’ve got a few boat projects completed.  We did a big hike this morning and have been enjoying the birds, fish, and life.  We’ll have to leave this paradise soon though as we are scheduled to pick up my parents on Saturday.  Hopefully we’ll have nothing but fair winds and calm seas while they are on board.