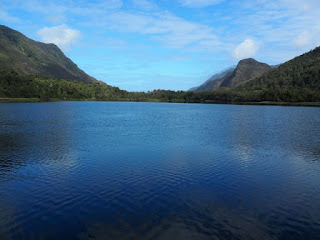 So when planning the trip south this year, one of the big obstacles to overcome is Gulfo de Penas. Also known as the gulf of Penance/Pain... We have friends who purposely mispronounce it "The Gulf of Penis"... You get the idea. Last Thursday we finished getting the boat fixed and we noticed the possibility of a weather window today or tomorrow so we've put in 50 NM days since then to get in position in time. Yesterday was not noted as part of the "good" weather window for the crossing but we assumed coming here wouldn't be as bad as the forecast for the gulf as it was only a small step out into the Southern Ocean and back. How bad could it be?
Unfortunately we are without internet so we can't show you how bad it was (including Gary's barf all over the boat) but it was bad... Very Bad. Anyway, as usual the boat took care of both of us while we suffered in the cockpit. We hadn't planned for the conditions so we were stuck without food or the ability to go below and make something for lunch. We just suffered in the cockpit.
Arriving in our current anchorage was certainly welcome. We licked our wounds, cleaned up the boat and spent today making food and preparing for the real crossing tomorrow. We will spend New Year's eve on passage but if all goes as planned maybe we will celebrate the start of 2020 having finished the crossing with a Champagne breakfast (with Bacon) on the other side. Given the lack of wind we've seen today, sunny skies and forecast for tomorrow we can assume we've already given our penance for this crossing and it will be smooth sailing. Everyone should keep their fingers and toes crossed for us. We'll report back on reality when we get there.
Happy New Year everyone!
Posted by Gary and Karina at 12:44 PM No comments:

Email ThisBlogThis!Share to TwitterShare to FacebookShare to Pinterest
Location: Gulf of Penas, Chile 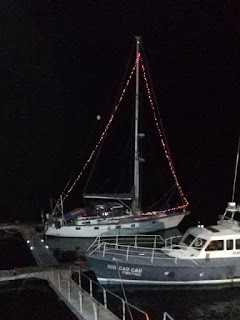 Continuing from the previous post, Karina had just traveled many days to meet me in Chacabuco.  I had left the boat in Puerto Aguirre and taken a small "launcha" on a 4 hour trip to Chacabuco.  Both of us were feeling the stress of planes, trains and automobiles over the holidays but it was nice to finally be in the same place after almost a month apart.

The next day in Chacabuco was spent calling around to the major marine stores in Puerto Montt and Santiago.  Thankfully the owners of each spoke excellent English and were both very helpful.  Unfortunately, neither had the parts we needed.  We then found out that our friend Steve on s/v Threshold in Puerto Montt would be flying to Florida for a day just before Christmas to pick up some parts for his boat.  If we could get the parts to his house in Florida on time, he’d bring them down for us.  Hooray!  The parts were ordered and arrived in Florida for pick up.

Steve is currently on his way there now and should be back on Christmas Eve.  We will return to the mainland on Dec 24th, spend the night in the lovely hotel Loberias del Sur in Chacabuco, then Karina will fly to Puerto Montt on Christmas Day to pick them up.  I will be negotiting the border crossing to try to restart the clock on my 90 day visa.  If all goes well, Karina will be on the return flight in the afternoon and we will enjoy a Christmas dinner at the hotel.  We will then return to Sea Rover on the 26th and prepare for departure soon thereafter.  Simple, right? 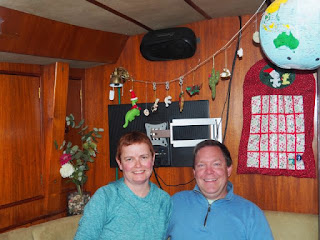 In the meantime, Sea Rover is sitting quietly at the dock and we are finishing up some boat projects and planning our trip down south.  We installed our 3 strings of Christmas lights on the boat a few nights ago, and were apparently the talk of the town the first night.  According to the marina manager, people from the town kept coming down to take pictures of the boat.  I guess we must be the first sailboat they’ve seen decorated with lights. Karina has also decorated the inside of the boat with my few Christmas decorations and more lights and so it looks festive. 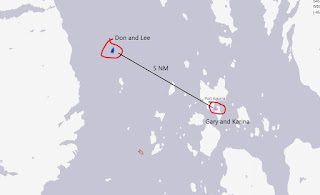 One highlight this week was having Lee and Don’s cruise ship pass within 4.5 nm of the marina here in Puerto Aguirre.  They were on the tail end of their cruise around Cape Horn and weren’t expected to come anywhere near us.  However, the weather intervened and the cruise ship decided to take the inner route up the channels and passed right by us.  Unfortunately visibility was very poor so we didn’t see the actual ship, but we saw them on our AIS unit and had a good chat on the phone with them as they went by.  The wonders of modern technology.
In closing, we’d like to wish everyone a Merry Christmas and Very Happy New Year, wherever you are.  Hopefully our next blog post will be from a more remote anchorage further south.  Safe travels for all over the holiday season.

Our plan was to be well south of Puerto Aguirre by now.  But as they say, making sailing plans is like writing in the sand at low tide.  Instead of waiting for a weather window to cross the Gulfo de Penas, which is where we expected to spend Christmas, we will be spending it at the dock in Puerto Aguirre waiting for parts to arrive from the US.
The 2020 season is off to a good start.
As I had to work in Vancouver until mid-December, the plan was for Gary to single-hand the boat from Puerto Montt to Puerto Aguirre, a distance of about 300 nm.  I would then fly into the tiny town of Balmaceda and make my way to Puerto Aguirre via minibus and ferry.  A chance email to friends Ty and Hillary, who we met while sailing in Mexico back in 2017, resulted in them flying down from Seattle to help with the delivery.  As they are hoping to sail Chile in their own boat in a year or two, this was a good opportunity for them to see a bit of the country and to figure out how things worked.  A win win for all.

After returning to the boat from a three week land trip in Peru with Gary’s parents, aunt and uncle, Gary went into overdrive trying to finish various tasks and put the boat back into the water.  The Crew arrived a few days later, and after a flurry of activity provisioning and doing last minute jobs (ie, putting on the sails etc) they left the marina at the end of November.  They had a few easy days enjoying the pastoral anchorages around Puerto Montt and Isla Chiloe.  Then the weather began to change and a few hard days ensued.  Luckily the Crew were up for absolutely anything and everything.
On one particularly difficult afternoon, Sea Rover II sailed around the corner off Isla Tranqui and encountered large, confused seas.  Anything that wasn’t fully attached to the boat went into the sea, including the two mesh bags containing our three x 100 m lines used for tying the boat to shore while at anchor!  The Crew leapt into action and managed to retrieve one bag and two lines, while the Captain tried not to get the lines wrapped in the prop during the recovery mission.  Did I mention this all happened close to shore near rocks in 30 knots of breeze?  Good times.  Anyway, one bag and line was lost to the sea but Sea Rover and crew survived the day and limped into a nearby anchorage to recover.  New lines were purchased the next day in the town of Quellon, while performing a massive diesel run (3 trips with the jerry cans), and then Sea Rover was on her way again into the wilds of Patagonia.
Their first stop was the lovely protected anchorage of Bahia Tic Toc, which is one of the nicest in the area.  They spent a few days swimming (yes, Gary went swimming in 18 deg water), looking for the penguin rookery (didn’t find it) and exploring the area, then they moved further south.  After several more stops in beautiful anchorages (see the “Adventure Adrift” YouTube channel for some fantastic drone footage of the areas they visited, and possibly some shots of Sea Rover), they decided to spend their last night out in a small anchorage just north of the town of Puerto Aguirre.  Just before entering the anchorage the depth sounder died.  Using the guidebook as a reference, they maneuvered through the tricky entrance and got the boat safely anchored without hitting anything.
After spending the rest of the day trying to coax the depth sounder back to life, Gary admitted that the depth sounder was good and dead.  Having decided that this was a “helpful” piece of equipment for sailing in Chile where the charts are so-so, I received an urgent satellite email from Gary on Friday at 11am telling me “try to find a new depth sounder” before leaving on my flight to Chile at 11pm Friday night.  As I had a full day of meetings and lab celebrations that day, my stress level skyrocketed 1000%.  In between meetings and Christmas lunch with my staff, I called every marine store in the Vancouver area, only to be told that no one had it in stock.  Not knowing what else to do, I got on the plane and flew to Chile.
After many hours of travel, I met up with Gary in the small town of Chacabuco on Sunday night (the Crew left to go home on Saturday).  He then gave me the second piece of news regarding the boat.  Upon arriving at the dock in Puerto Aguirre the day before, the throttle cable (ie, the gas pedal for the boat) snapped.  Ty and Hillary had the lines on the dock and asked him to put the boat in forward to move further up the dock.  Gary put the boat in gear and… nothing.  No forward movement.  He was incredibly lucky that it hadn’t snapped 30 seconds earlier as they were docking into a 30 knot headwind and he probably would have put the boat up on the rocks before they got the manual throttle down below sorted out.  Lucky.  But now we had to find two specialty parts while in a very remote location in Chile!
We have many spares and repair material for most things on the boat but in 20 years of sailing we’ve never had any issues with these two so we had spares for neither item.  Neptune’s laws go as follows:
Law number 1:  If its going to happen, its going to happen out there
Law number 2: If there is a bad time for it to happen, it will happen then.
Law number 3:  No matter how many spares you have on board, the thing that broke won’t be one of them.
I know there are other Neptune’s Laws but repeating them is known to be a method of invocation so we’ll leave the list there…
As for Ty and Hillary...  Hopefully we didn't colour their dreams of sailing to Chile by keeping the boat too cold and making them sail in crazy conditions.

Posted by Gary and Karina at 4:24 PM No comments: