Our hearts broke yesterday as news trickled in about the destruction in Guaymas and San Carlos from Hurricane Newton.  5 boats were sunk at the Fonatur docks where we have Sea Rover on the hard.  Many others sustained damage of some sort.  There are reports of any where from 20 to 200 boats toppled over at Marina Seca in San Carlos.  All of these boats are someone's home for at least part of the year and all of them have had endless hours of blood sweat and tears poured into them.

The towns of Guaymas and San Carlos both suffered major damage but in true Mexican fashion less than a day after loosing most of the electrical infrastructure reports are already in of power being restored.  What the people in these areas lack in material wealth, they certainly make up with their incredible sense of "getting it done"!  The locals who having nothing yet still lost everything yesterday, will never get any press about their plight.   Having said that, today will just be another day for them as they pick themselves up, brush themselves off and carry on as happy and friendly as ever. 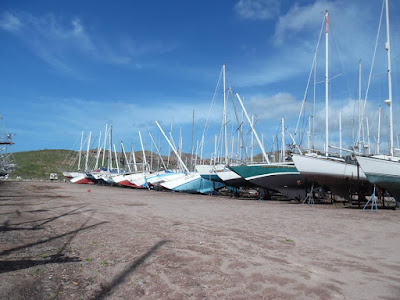 Sea Rover some how came out unscathed, but we feel no joy as many of our friends will be dealing with the daunting task of repairing the dream.  We can't imagine the emotions we would be feeling if Sea Rover had fallen over or worst still sunk.  Our boat has kept us safe through many difficult situations that we put her in and I would be beside myself if harm had come without me there to do everything I could to keep her safe.  The road to recovery will be long for many this year.  All we can say is "just do it!".  Sure it will be hard, but by finding a way to pick yourselves up and keep your vision alive, the rewards will be all that much greater at the end when you are back in the water enjoying sun downers with great friends and not a care in the world.