You Know You've Been Here A Long Time When....

….Swallows Try To Take Roost in Your Boom.

Although we arrived at the boat on December 30th, it took us a while to get organized and start working on all the boat projects that needed to get done.  Both Gary and I caught a cold when we arrived, which pretty much put us out of commission for the first 10 days or so.  We are now both healthy again and the boat projects have commenced.  Since we arrived we have worked on the following:

- Replaced 8 lights
- Oil change/engine inspection (so far so good)
- Installed the hydronic heating system – this was a biggy and took us DAYS!!!!!!!  As of about 2 minutes ago we have both heat and hot water.  Woohoo!  Now we just need to remove all the gear from storage in the shower area…
- Removed several litres of water from our diesel.  Not sure how it got there, but we now know that our Baja filter that we use whenever we add diesel to the tank actually works.
- Polished the diesel.
- Installed a new shut off valve in the diesel system.
- Fixed the furler, which apparently cracked some time last year.
- Made correct sized poles for the stack pack (sail bag on the boom).  Made adjustments to stack pack to ensure poles can’t come out.
- Glued new oar locks onto dinghy.  Tried to find location of the new hole that has developed – still a mystery…
- Made new genoa sheet lines (we chaffed through our big line last year).  Funnily enough, we found a sheet of exactly the same diameter on our boat when we got back from Christmas.  One of the other Cruisers found it in the water and assumed it was ours.  As no one claimed it, we decided to keep it.  After much soaking in fresh water and fabric softener, it is almost as good as new and will work perfectly!

There are still many things to do, but we are getting there.  The weather is good (sunny and windy – sometimes warm, sometimes cold), the company is great (still a few Cruising boats here) and we love Valdivia, so it hasn’t been a hardship being here. 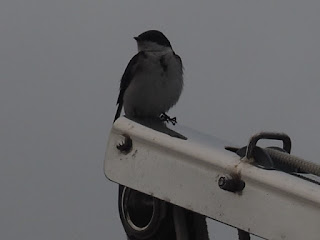 This brings me to our story about the swallows.  I finally got around to removing all the covers from the mast, boom, winches etc  a few days ago.  The next morning we noticed several swallows dive bombing the boat and fighting in the air.  Strangely, they seemed to keep landing on the back of the boom.  Then we noticed they were carrying nesting material.  Oh oh.  In less than 24 hours they had managed to find the hole in the back of the boom and decided it was the best place they had ever seen to make a nest.  I have to admit that from a bird perspective it was a pretty awesome spot.
Unfortunately it wouldn’t be so awesome for the birds when we become a fully functioning sailboat and actually leave the dock… So, we stuffed the hole with paper towel.  The damn birds have been persistent though and have continued to guard the “spot”, just in case it miraculously opens up at some point.  We’ve been serenaded by them each evening and morning.  We thought that was kind of nice, then realized they had chosen the inside of the hydrovane as their next nest location… Sigh.  A couple of well-placed sponges seem to have taken care of that.  We’ll miss the music, but the birds will ultimately be happier. 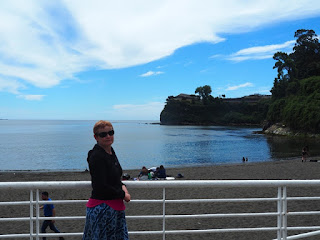 In addition to doing boat projects we’ve taken some time to enjoy the local sights.  We spent a day wandering around Valdivia enjoying the river, and we did a day trip to nearby Niebla and visited the fort that guards the entrance to the harbor.


We worked up an appetite walking around the fort and so felt justified in eating an enormous crepe filled with ice cream, bananas and Nutella.  Then we had a bowl of fries for dessert.  Yum.  Feeling slightly guilty after all that fat we walked through town and down along the lovely black sand beach that runs almost all the way up the coast.  Despite the sun, the wind was cold, so I was happy to have a sweater.  Even Gary agreed that the water was FREEZING. No swimming here!


We are heading up to Santiago later today to meet up with our friend Dina who is there for work.  We plan to take advantage of the fact she speaks perfect Spanish and visit Valparaiso and do a bit of sightseeing in the city.  We are looking forward to it.

Posted by Gary and Karina at 4:43 AM No comments: