Being the techie guy that I am, Karina is at a big disadvantage when it comes to posting our experiences.  In the interest of keeping things fair, I'm going to set up a page similar to he said/she said where we both get to write our version as we remember it.  This will probably be one of those posts.  We leave it to the reader to decide on which version is most likely correct.

Malcolm and Dina left us to our own vices in the wee hours on the morning of the 6th.  Having listened to the weather on the night before we were surprised when we checked the weather again that morning and found the predicted blow actually was happening.  20-30 SE increasing to 35 with waves 1-2 meters increasing to 3.  WOW, I thought... we might actually get to sail.  Karina obviously thought something different because she wasn't smiling when I suggested we leave the dock.  Like the good husband I am, I read these signals being sent and changed my suggestion to "lets wait till after lunch".
We continued to watch the hourly reports and I could see the winds were certainly decreasing.  43 at 10 am, 42 at 11 am and 41 at noon.  I tried again to suggest that we should leave the dock.  For sure the winds will have died by the time we get out there...  in fact it might already be to late!  At 3 pm with the winds dropping well below 35 I tried once more but quickly gave up.  Obviously Karina was too tired from packing up the house and needed one more rest day.  I went up to the office and paid for one more day at the dock, vowing that we would sail tomorrow whatever the weather was.
The next morning I bounced out of bed at 6 am, got the boat and Karina ready for a 6:30 am departure and we caught the last bit of the ebbing tide out of the bay.  While it was a touch squally and the conditions were not nearly as good had we left the day before, we still had a great sail from dock to bay around Cape Caution to Fury Cove.
Aptly named, like Nahwitti Bar and Cape Flattery, Cape Caution strikes fear into the hearts of all boaters.  To venture past any of these points you must upgrade your insurance and say good bye to your loved ones.  Many spend their whole boating careers never making it past these points.  Having done the trip last year we were now old salts and as I expected our trip north was easy peasy.
Karina seemed happy sailing the boat downwind for a change so I went and tried to have a nap.  This being her first time downwind sailing, I was a bit nervous in her ability and was forced on numerous occasions to jump up and make sure she didn't switch back to upwind sailing by mistake.
As it was my worry was unfounded.  With the fishing fleet nipping at our heels and eagles trying to land on our rig, 10 hours after departure we rolled into Fury Cove. We spent a wonderful few days sitting on one of the many empty beaches on this coast and Karina made me a nice dinner to make up for missing the really good sailing.
Karina's version (ie, the truth):  The beginning part of our Port Hardy day was largely correct - it was blowing well over 40 knots with 5 foot chop outside the harbour.  It was supposed to subside in the afternoon, but was still blowing 42 knots at 3pm.  Now, Gary was correct, the wind was blowing from the right direction, but to get to the island group that was to be our destination that day ('it's only a 3 hour sail', he said - we all know how well those turn out...) we would be going completely broadside to the 5 foot seas (with 4 second periods) for about 2.5 hours.  I probably don't need to say that those are bloody uncomfortable conditions.  So, after some 'discussion', we decided to stay another night (I should add that none of the other offshore boats at the marina left the dock that day either).  I went to bed at 10pm while Gary stayed up to do some banking and download some charts and stuff he hadn't had a chance to do before we left Vancouver.  I woke up at 4:30am and realized I was alone in bed... Gary was STILL on the computer.  As the alarm was set for 5am so we could be ready for a 6am departure, I suggested Gary head to bed to get a bit of sleep (seeing as how we were going to sail one of those 'you might die if you go there' places he talks about in his post).  He went to bed and I got up.  I got the boat and dog ready to go, then woke him up at 5:55am.  I motored off the dock at 6am with a very bleary eyed husband handling the lines. 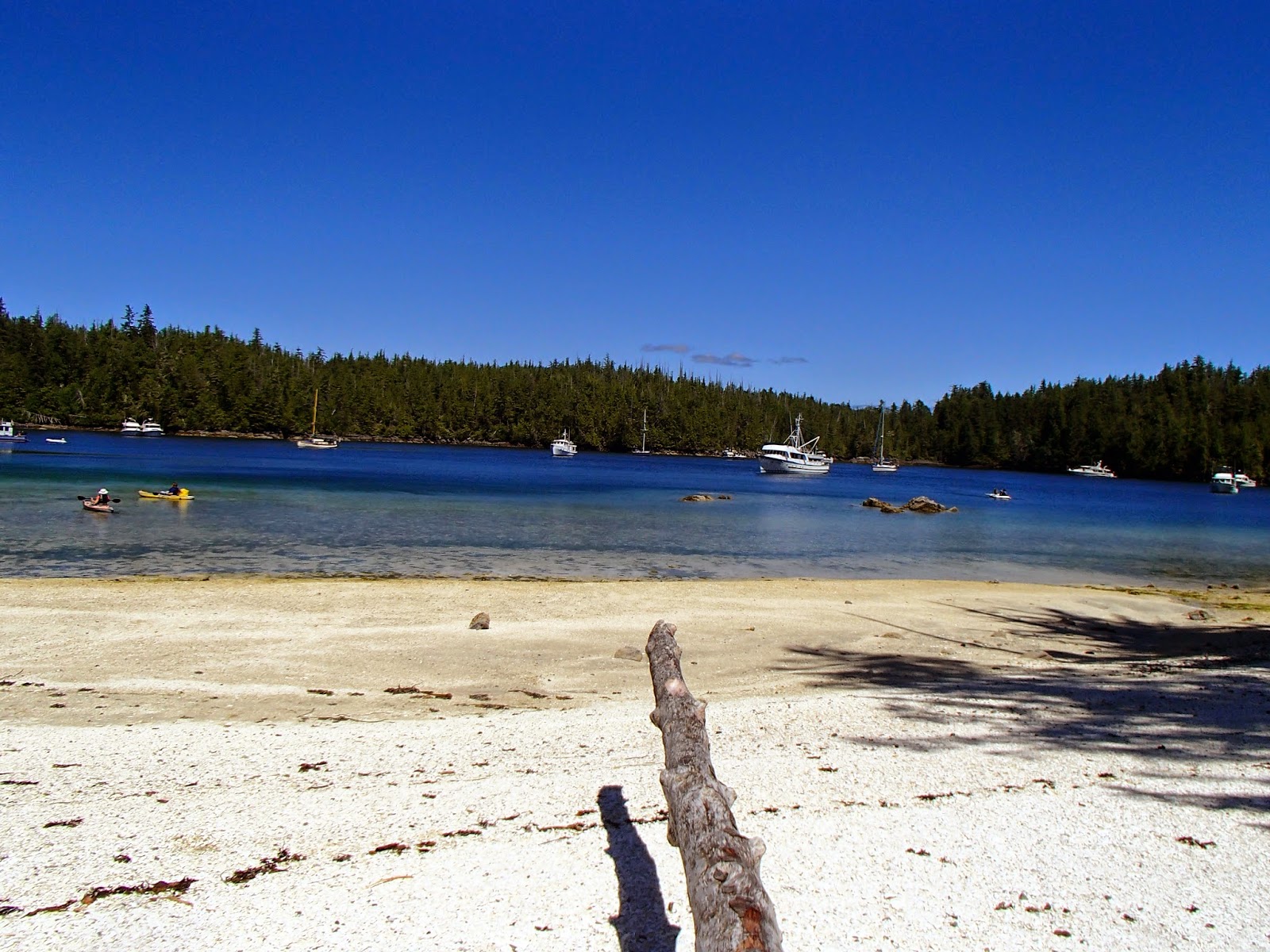 Gary did manage to stay awake until we were out in Queen Charlotte Sound.  Then he slept for the next 4 hours while I learned how to sail our boat downwind.  With the help of our new crew member "Otto" (our fancy new autopilot), I gybed the boat back and forth, back and forth.  It was a great sail in 20-25 knots of wind, in 2-3 foot seas with a moderate swell (which apparently means 1-2m).  All in all, pretty perfect.  We arrived in Fury Cove - surprisingly there were only 4 other boats there so we got a great spot reasonably close to the beach.  Overall a successful day.
Posted by Gary and Karina at 6:50 PM