Sailing in Patagonia is Just Like Sailing in British Columbia, Except….

My very first impression upon sailing into Valdivia, Chile last March after our passage from Easter Island, was ‘wow, this looks so much like BC’.  That initial thought has repeated itself in my head over and over again as we sailed south from Valdivia and into northern Patagonian waters.

The general topography is similar to BC.  There is a huge 190 km long island called Isla Chiloe (similar to Vancouver Island) that protects a big open straight (similar to Georgia Strait) that contains many small, protected islands (like the Gulf Islands).  There is then an open body of water (crossing from Port Hardy around Cape Caution) to a massive archipelago of islands where you could literally get lost for years.
As we sailed down the protected east coast of Isla Chiloe and looked to the east, we saw the towering mountains of the mainland, just like we do when sailing along the coast of Vancouver Island.  The mountains are ragged, tall and snow-capped, just like in BC.  The winds whip up the straight and kick up a good chop just like they do at home.   The water and air temperature are a balmy 12oC (in mid-summer), boat-eating seaweed flourishes, and there are plenty of nooks to explore.


But, as we looked a bit closer, we began to see the differences. 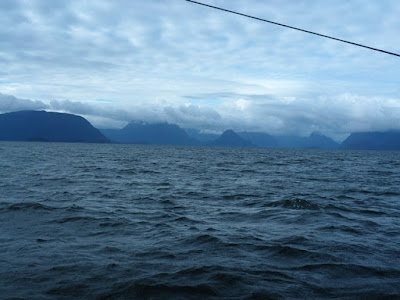 For example, the islands off Isla Chiloe, which look strikingly similar to the Gulf Islands at first glance, are not full of tourists.  They are inhabited by people who have lived and farmed there for generations.  While the odd foreigner makes the trek to the islands, the vast majority of visitors seem to be family of people that live there.  Unlike the Gulf Islands, there are very few cottages for wealthy “city people”, and the islands have a quaint, quiet vibe of people just getting on with their lives.  We visited the tiny island of Quehui (pronounce Q-E) and anchored in from of the town of 800 people.  Upon arriving on the beach in our dinghy, we were instantly welcomed (accosted?) by Ignacio and his brother Patricio who run a small café (from the living room of their house) that doubles as the tourist office.  While Ignacio didn’t speak a word of English, Patricio was learning and so we managed a stilted conversation about life on the quiet island.  Unfortunately his English was about as good as our Spanish, but we appreciated their hospitality and interest.  They encouraged us to return the next day for a lunch of “loco”, which turned out to be giant snail foot, served with lime and mayonnaise on top of a tomato.  Sounds weird, but it is apparently a delicacy that can only be found in southern Peru and Chile and is quite special.  It was actually pretty good and an experience unique to southern Chile. 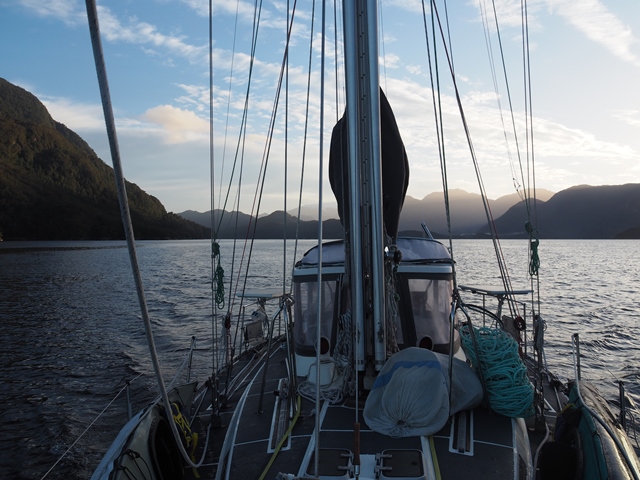 Another major difference is the flora and fauna.  While the landscape looks similar (rustic tree-filled mountains), the kinds of trees are completely different.  Instead of impenetrable groves of douglas fir, hemlock and lichens, here there are impenetrable jungles of Cypress, Laurel, Beech, Gunnera (looks like giant rhubarb), tree ferns, tussock grass and lichens.

The animals are different as well.  While the South American Sea Lions are curious like in BC, they are HUGE and have enormous manes.  Nothing gets the heart pumping faster than looking behind your sea kayak and seeing six of them tailing you…

Pods of the beautiful Peale’s Dolphin have visited us to play in our bow wave several times, and we were extremely lucky to see a rare Marine Otter (only 1000 left), which is smaller than its’ northern cousin but eats dinner on its’ tummy just the same.

We are constantly seeing new kinds of birds, which keep us running for our identification book.  So far we have sea kayaked with Magellanic Penguins, watched Flightless Steamer Ducks running across the top of the water, been delighted by the antics of the black and white Imperial Cormorants, and been amazed by the Kelp Geese, where the male is all white and the female is predominantly black and brown.  The hummingbirds still go for lovely pink flowers like they do at home, but here they are the size of sparrows.  And then there are the Albatross.  Almost every day we have been entertained by watching these majestic beings soaring above the waves.  Watching them has saved my sanity more than once. 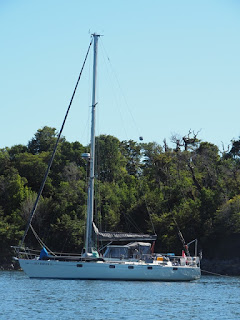 It is still early days for us in our exploration of this lovely country.  The familiar surroundings make us feel comfortable and at home, while the differences are a delight to discover. 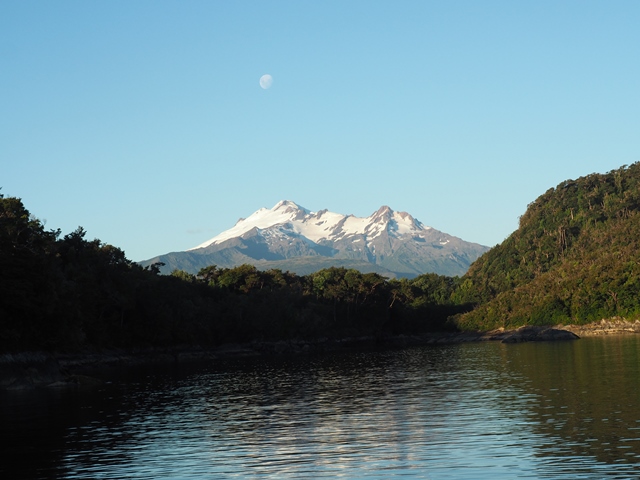