In between getting the boat ready for our trip into Patagonian waters, we decided to take a couple of trips to see the country.  The first was to Santiago to meet up with our friend Dina, who was in town for work.  It was 33oC when we were there, so much warmer than we were used to!  We wandered lazily around town for an afternoon, ate ice cream, had sundowners  in a rooftop bar with a lovely view, and then ate a truly spectacular meal at a restaurant called Peumayan.  They specialize in authentic Chilean cuisine and served a 3 course meal that consisted of 22 “bites”.
Despite Gary’s initial concerns that there wouldn’t be enough food (we actually ordered an extra entre in anticipation that he’d be hungry afterwards), we had more than enough to eat (didn’t want the entre).  It was delicious!  We were lucky to get in as the restaurant only does one seating a night (it was a 3 hour meal) and they are normally booked well in advance.  Luckily, when one of their guests cancelled, we were in the right place at the right time.  If you are ever in Santiago, this restaurant is definitely worth checking out.  It was a true eating “experience”.

On Dina’s day off we took the bus to Valparaiso for the day.  I’d read about the city in various novels and so it was on my bucket list.  Unfortunately I was disappointed.  It is a huge city built up the hillside and has a lot of really beautiful old buildings, but unfortunately they built the port right in front of all the wonderful waterfront buildings.

Now the view is of container ships and a big, dirty busy street and set of train tracks.  The waterfront boardwalk between Vina del Mar, just up the coast and Valparaiso ends at the beginning of town.  It is such a shame.  We read somewhere that people gave up on Valparaiso about 50 years ago and let most of the old buildings fall into horrible disrepair. 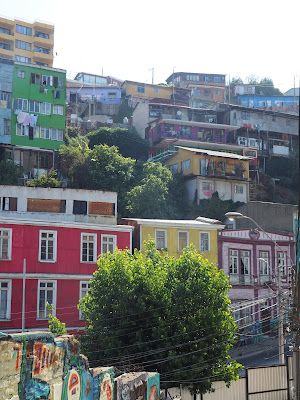 For the last 20 years or so, there has been a movement to fix up some of the buildings and people do seem to be taking some pride in their surroundings.  There are areas where they’ve painted all the old buildings in vibrant colours, and there are several narrow “passages” that meander between the houses built into the hillside. 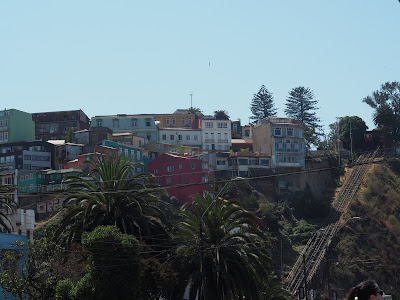 It was interesting, but still not quite what I expected.  It is also the only place we’ve ever travelled where a local told us that the area we were in (the tourist area) was very dangerous for tourists.  At 4pm in the afternoon…

Despite that slight downer, we had another great meal with a view of the whole bay, and thanks to the heroic driving of a collectivo driver, we managed to catch our bus back to Santiago.
And no, we didn’t get mugged.

Our next trip was to San Carlos de Bariloche, which is a small town in Argentina just on the other side of the Andes mountains.  As Chile only allows visitors to stay for 90 days at a time, we had to cross the border to start our 90 day clock again.  As renting a car gets challenging when you want to cross a border (and expensive), we opted for the bus.  It took us 9.5 hours to drive there, but we had nice, lie back seats and enjoyed a nice, quiet ride.  The scenery through the “Region to los Rios” (River Region) in Chile into the mountains was spectacular.  The drive through the mountains was also pretty stunning.  Unfortunately the bus only stopped at each border (an interesting experience) and so we didn’t get to take any pictures.

Bariloche itself is on a big lake that connects with at least 7 other lakes.  The town isn’t anything to write home about, but the area is beautiful.  It is a major ski area in the winter, but has recently become a summer destination as well, as evidenced by the billion tourists in town.  We stayed in a lovely hotel right in the heart of the city where we had a fantastic view of the ocean.  Their website claimed they had the best breakfast in Bariloche and they didn’t disappoint.

As we only had one day in town, we decided to do the two activities that involved getting to the top of a hill so we could get a good view of the area.  We took the local bus out to the first hill, Cerro Campinario, about 20km out of town and then took a chairlift to the top of the hill.  We could have walked, but I’d burned my feet the day before the trip on either our boat deck or on a hot water bottle, I’m not sure which (yes, in one day the deck was hot enough to cook an egg during the day and it was cold enough at night to warrant a hot water bottle – gotta love Valdivia).  My sore feet were not happy to be in shoes, let alone hiking anywhere!  The views from the top were spectacular.  We finally understood why everyone kept telling us that Bariloche looks like Switzerland. 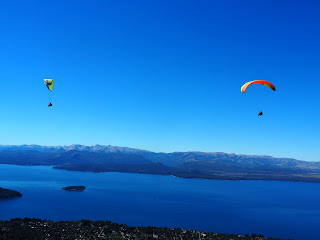 After returning to town, we caught another bus to the base of yet another viewpoint.  This time we took a gondola to the top of Cerro Otto.  The view from the top wasn’t quite as spectacular, but we spent a long time watching the paragliders taking off and circling around the top of the mountain. Very cool.
Our other town activities included eating in two great restaurants recommended by friends of Dina’s, and sampling the local ice cream - twice.  Bariloche has a big Swiss influence so there are chocolate shops and ice cream parlours on every corner.  Definitely my kind of town!

Alas, a weather window for heading south was shaping up for Feb 4th and so we arrived back in Valdivia late Saturday night, after a 2.5 hour delay waiting for the bus in Bariloche.  Despite the late night, we were up early on Sunday in an attempt to get the boat ready for the coastal passage.  As the wind blows from the south 99.9% of the time in the summer, finding a 30 hour period where the wind was going to blow from the north was like finding a pot of gold.  We had to take it.  So, we did a million last minute jobs, cleared out with the Port Captain and provisioned.  It was exhausting, but we threw off the dock lines at 11:45am on Feb 4th and started on our way!  It was sad to leave so many good friends in Valdivia, but we are all Cruisers so I’m sure we’ll meet again one day.

We headed down the river (against the current, of course) and sailed out of beautiful sunshine and 30oC, into fog and 10oC at the mouth of the river!  Brrrr.  The 135nm trip down the coast was uneventful, but very cold.  With the fog and the fact there was no moon that night, it was probably the darkest passage we have ever done.   It was very difficult to discern between the sea and sky. The only light was from the phosphorescence in the water, which was the brightest I’ve ever seen.  As promised by the weather gods, we had strong north winds the entire time and so we cruised along at 5 knots (should have been faster, but major current against us) and arrived in an anchorage at the top end of Isla Chiloe yesterday afternoon.  We are close to the town of Ancud and so we have marginal internet.  We took today off as a rest day (although Gary is in the back fixing the heater), but will continue through the pass and into the inner waters between Chiloe and the mainland tomorrow.  The pass runs at 8-9 knots and so you have to time it correctly.

We had a nice, quiet night and morning at anchor, but it is now blowing >20 knots from the south in the bay.  We are definitely glad we made it here before the south winds started up again…
Our Patagonian travels begin!

Email ThisBlogThis!Share to TwitterShare to FacebookShare to Pinterest
Location: Chile