We had a lovely downwind sail on Saturday to our present location in a little bay in an island group off Isla Chiloe.  There is a small village across the water and the bay ends in a labyrinth of small canals that lead for miles in any direction.  The area is very pastoral and so we’ve been serenaded to sleep by the bleating of sheet and the crazy mooing of cows.  Oh, and the roosters seem to crow in the evening, not the morning here.  Maybe it is part of being upside down on the other side of the world.  It is a very quiet and pleasant place.

We discovered a couple of truly astonishing things on the way into the anchorage.  The first (and most important, in my opinion,) is that there are penguins close by.  As we were motoring into the bay I noticed a strange cluster of birds on the water.  We moved a bit closer, and yup, they were penguins!  Gary didn’t believe me (even though he was wearing his glasses), but I know a penguin when I see one.  After a quick circle of the group, we continued on our way.  Then, just when we were entering the bay and Gary needed me to keep an eye on the depth, there was another one, all by himself.  I quickly abandoned Gary to monitoring the depth alone and grabbed the camera to catch a few shots.  Only one worked.  But, afterwards even Gary had to admit that it ‘might’ be a penguin.

The second astonishing thing was the realization that we aren’t the only boat out here.  It turns out that there are many Chilean Cruisers, and we might have found them all!   After several days of feeling like we were the only sailboat on the planet, we pulled into the anchorage and found several other sailboats already there.  The funniest thing was we actually knew three of them  from Club de Yates in Valdivia where we kept Sea Rover over the summer (their winter).  Small world.   As the anchorage we are currently in is both picturesque and very protected, it is popular.  We’ve had as many as 7 boats in the bay at one time.

We’ve had a quiet few days here catching up on boat jobs, doing a bit of paid work (me), and exploring the area by dinghy and sea kayak.  It has been a restful time.  We’ve enjoyed watching all the birds, the most entertaining being the Flightless Steamer Ducks that run across the top of the water instead of flying.  Several of the pairs have babies, so it has been fun to watch them learn how to feed etc.  We’ve also enjoyed the antics of a new type of cormorant – the Imperial Cormorant.  They are beautiful to watch try to take off and dive for fish. 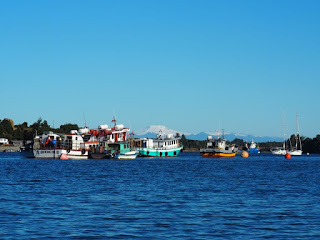 Alas, it is time for us to move south if we are going to make it down to our ultimate destination of Laguna San Rafael.  Tomorrow we will head further down the island in search of better cell signals and internet.