The End of the Road – This Year 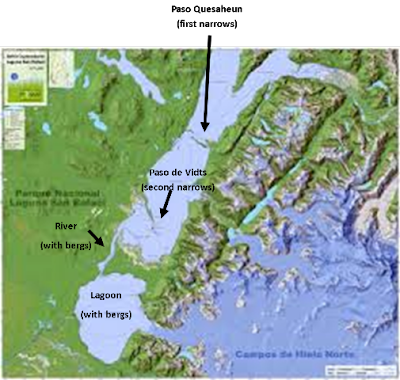 Our goal this season was to make it down to the glacier at Laguna San Rafael, roughly 450 nm south of Valdivia.  I’m pleased to announce that we reached our goal on March 7th.

Laguna San Rafael boasts the furthest glacier found north in the southern hemisphere at 46o 38’S.  We’d been told that lots of tourists do the trip, but don’t be fooled – this area is REMOTE.  You can get there by small tourists boats (at least 14 hours return from Chacabulco), small Cruise ship, or by airplane (although we didn’t see any of those).  All of those methods of transport are reasonably straight forward.

Travelling there in a sailboat is another matter and requires a bit of planning and a lot of guess work.  The reason for this is the glacier is located at the bottom of a very long, narrow strait, that is accessed by travelling through two narrows where the current runs fierce, and down a river.  The currents can run up to 6 knots and so for a sailboat where our maximum speed under motor is 5 knots, this requires careful timing of the passes and river to ensure you are travelling WITH the current (ie, on the flood).  This sounds simple, and in theory it is, but as it turns out, this is where the guess work comes in.

We have two guidebooks for Cruising in Chile – the “Italian Guide” and the “Royal Cruising Club” of England Guide.  Both are very good and cover the vast majority of anchorages on the more well travelled routes in the Patagonian canals.  Both books contain a section on Laguna San Rafael.  One informs the reader that slack water (which in my understanding of the term means that current is not flooding or ebbing, but has stopped moving – always the best time to cross a narrows) occurs 2 hours behind the tide times listed for the tidal station at Bahia Orange (plus 1 hour for daylight savings).  Having not come across Bahia Orange before, we did some research and realized it is the tidal station located at Cape Horn, 700 nm to the south!  OK.  We find the tide charts for Bahia Orange.  Great.  We check our chart plotter, which conveniently has tides for Paso Quesahuen, the first narrows, and decide that the numbers match.  Yippee.  We then read the other guide book, which helpfully tells us that high water (do they mean slack??) is 45 minutes AFTER the times listed for the tidal station at Bahia Orange.  Um, what?? Is anyone else confused?  Because we certainly were.

Our first hurdle was getting through the first narrows at Paso Quesahuen.  Since the guidebooks gave contradictory information, we chose the one that matched our chart plotter.  Seemed reasonable.  Unfortunately we learned, the hard way, that this timing was just plain wrong!  We went through the narrows at supposed ‘slack’ with a 3 knot current with us and 25 knots of wind at our back.  It was an interesting ride, to say the least.  Luckily the weather turned poor and so we had a few days to lick our wounds and to re-think our strategy for attacking narrows #2 and the river.

Being a Scientist, I’m always frustrated by incorrect or confusing information.  It stresses me out, especially when it creeps into my sailing life.  So, I spent one afternoon with a pair of binoculars, clock and a notebook and watched the current and tide just outside our anchorage.  According to one guidebook (and our chart plotter), high tide and supposedly slack tide were supposed to happen at 1401.  I started taking written observations at 1340.

And so on.  As near as I could tell, high tide (and slack, which seemed to correspond) happened an hour AFTER the tide indicated by Bahia Orange (without adjusting for daylight savings).  It turns out we weren’t the only ones confused by this contradictory information.  Our friends Annette and Mike on Rum Doxy, who we first met in Mexico back in 2016 and met again just north of Laguna San Rafael, were also confused.

On March 7th, after five days of waiting out bad weather, the sun shone brightly and it was time to make our run for the Laguna.  Mike went up the mast of Rum Doxy to look at the water outside the anchorage to assess when the current would switch in our favour.  Then we all got impatient and decided to go and see what happened.  Based on my previous observations, I felt that the next pass would probably turn either at 1230 or 1330 (still wasn’t 100% sure).  We aimed to get there at 1230, but then ended up sailing down Bahia Elefantes and arrived at 1330, just as the current was turning.  Perfect timing (or good planning.. or guessing).  We rode the flood through the next bay and finally into the river.  And here we met our next challenge.  Bergy bits.  These mini-icebergs (in addition to some full fledged ice berg daddies) get pushed out of the Laguna on the ebb tide/current and flow up into the river and the bay immediately north.  While they are pretty easy to dodge, it was a surreal experience.

The whole trip from the narrows to the mouth of the Laguna took about 2 hours.  The tidal currents were fierce and confused where the river emptied into the Laguna and at first the path through the wall of ice before us seemed unclear.  Luckily, a path emerged as we got closer, and then, Voila! We were there!  And it was spectacular. 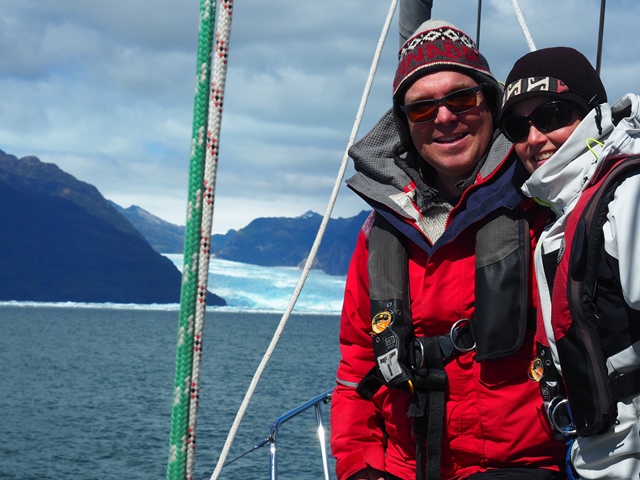 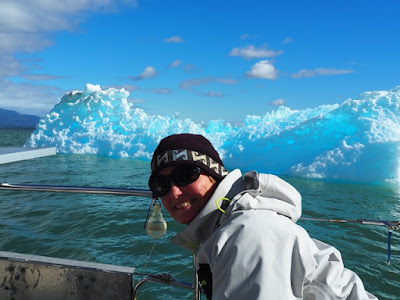 The glacier is located at the far side of the bay, which is probably 8-10 nm wide.  We came out of the river into a fairly open area (ie, ice free) and were able to get our bearings.  Rum Doxy and Sea Rover II were the only beings for miles around.  After drifting slowly with just a single reefed main, Gary got impatient for speed and put out half the genoa.  Next thing I knew, we were cruising through the lagoon at 4 knots (too fast to truly enjoy the quiet beauty of the location in my opinion, but Gary was happy).  Despite our initial thought that there was “ice everywhere”, on closer inspection it turned out there was an area full of ice, pushed by the days wind, and there was a reasonably open area with a few bergs here and there.  This is where we sailed.  It was magical. 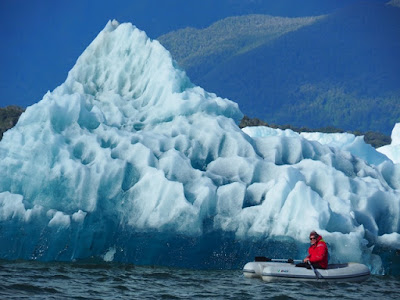 We made it about half way across the bay, but unfortunately, our time ended too quickly as the day was getting long and the tide/current in the river was due to switch (or so we hoped). 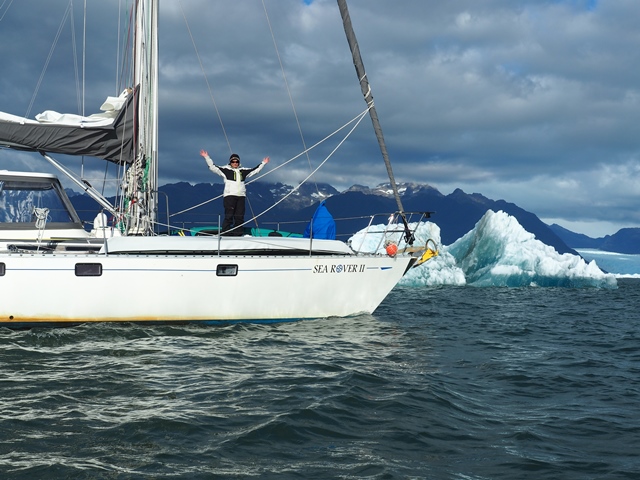 After a quick stop to put the dinghy in the water to get a closer look, we reluctantly turned around and headed back to the mouth of the river.  We arrived before the switch from a flood to an ebb and fought our way up the river for a half hour, before the current changed in our favour and swept us (literally) back out and through the pass.  The river landscape was completely different on the way out as there wasn’t a bergy bit to be seen – they’d all been returned to the river on the previous flood. 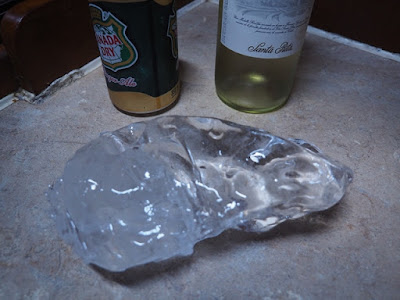 After a long day, we put the hook down as the sun was setting.  A glorious day.  We celebrated our accomplishment by having drinks with glacier ice plucked out of the ocean in the lagoon.  Marvelous. 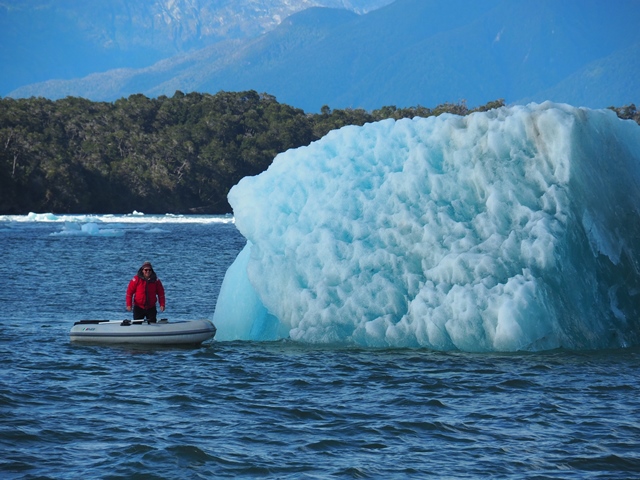 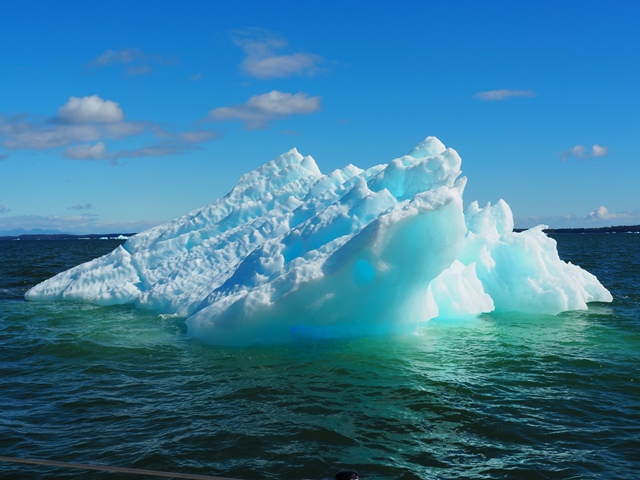 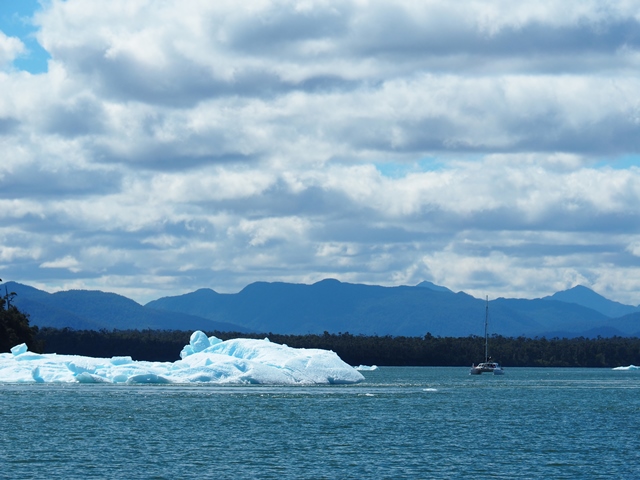 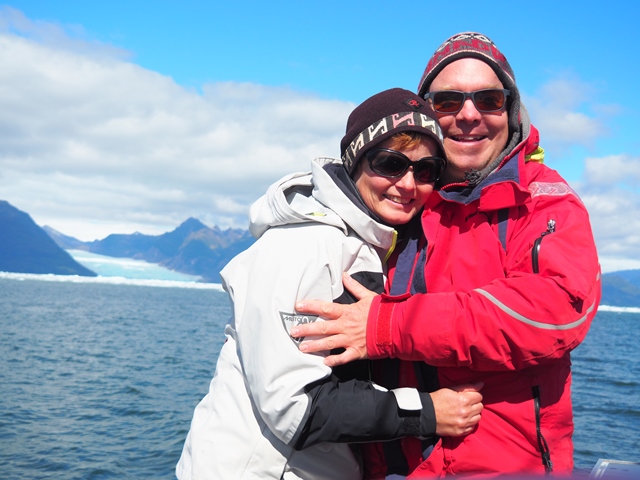