Mid-September marked the beginning of Cruising Season Two for us in the Sea of Cortez.  Gary and our friend Rob on s/v Avant stuffed our Subaru Forester with boat crap and drove to Mexico with the intention of supervising work being done to both our boats, and to get a few boat projects done before the season began.  While it sounded like a good idea at the time, the reality ended up not meeting the expectations…   It turns out that the average temperature in mainland Mexico in mid-September (or at least in Guaymas, where the boat was hauled out) is about 40oC, with 100% humidity.  And did I mention it is still hurricane season then?  Gary and Rob survived one Tropical Depression, with 50+ knot winds and more rain than you can possibly imagine.  Gary spent most of the night going around the yard tightening the stands of all the boats around us, then went and slept in the car.  By then the boat was moving so much on the stands he was afraid to sleep aboard.  But, they survived, as did our boats!  After an unproductive week (for them) sweating and living in McDonalds and Burger King (for the air conditioning), they admitted defeat and came home.  Luckily, the Mexican worker bees fixing our bottom didn’t seem to mind the weather and got most of the job done.  As this wouldn’t have happened if Gary hadn’t been there to harass them, it was a good thing he made the trip.

After a quick trip home to arrange renting out our house, Gary was off to the boat again on October 18th.  He arrived in the evening and was in the water 36 hours later, after a flurry of activity.  Happily, Sea Rover II was no worse for wear after her summer baking in the Mexican sun.  At least the heat took care of the little cockroach problem we developed at the end of last Cruising season!

Having made a 6 month commitment to work for the summer, I joined Gary on the boat on November 3rd.  I was shocked (and pleased!) at the condition of the boat – she was clean, organized, and most of the “put back into the water” boat jobs were done.  There were even flowers on board to welcome me home!   I promptly rewarded his hard work and efforts by catching a terrible cold, which I then shared with him.  Several whiny days later, I am now on the mend.  He is a still a few days behind.

As neither of us has been particularly healthy the last 2 weeks, we are still in Guaymas.  Despite our crappy health, we’ve been slowly picking away at the boat jobs that need to be done (installing solar panels, working on sewing projects etc) and helping friends get their boat ready for launch.

The weather has also “turned” in the last week and so we are back into the typical winter “Norther” pattern, where it blows like hell for 3 days, then there are 2-3 days of calm, and then it blows like hell again.  In the two weeks we’ve already weathered two of these, and are in the midst of the third.  Needless to say we won’t be going anywhere any time soon.

On Saturday we had our first “boat lesson” of the year – always check the tides, even if you don’t think you need to.  You guessed it, we didn’t complete this simple task and ended up going aground on a small underwater knoll when the wind switched direction.  Apparently they have negative tides here…   Of course the “grounding” coincided with a crazy squall (some people are calling it a “Microburst”) that literally came out of nowhere.  One minute there was a stiff breeze out of the south, the next it was blowing 30+ knots consistently from the north.  Unfortunately we were aground broadside to the wind when it hit 46 knots (!!) [about 90km/hr], and so we got heeled waaaay over.  Although this sounds 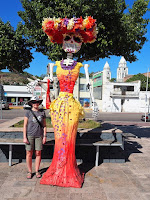 bad, it turned out to be a good thing as the wind actually heeled the boat over enough to push us off the knoll!  Luckily the whole event was over in a matter of minutes and no damage was done.  At least we know that our ground tackle can withstand 45 knots of wind, although I’d rather not put it to the test on a regular basis.   So, not unexpectedly, as this is an El Nino year, it looks like we are going to encounter some “weather” this year.

Guaymas is a pretty great place to be “stuck” though.  We are currently anchored in the bay off the Marina Fonatur, where we can shower and use the internet.  Our car is parked at the marina, which has been convenient for provisioning with food and water (we can’t run our watermaker in the harbor – too mucky) and for making Home Depot runs.  The town itself is great – we’ve been serenaded daily by several high school marching bands on the promenade (the sound carries really well into the anchorage), and the street food is fantastic.  We can both eat our fill of tacos and ice cream for less than $8!  It is almost cheaper to eat out than to cook for ourselves.

We’ve also been reunited with our main group of Cruising friends – Bill on Greybeard, Scott and Tanya on Kialoa, and Rob and Debra on Avant.  So, it has been a fun time.

But, it is not all play… I’m still working for STEMCELL one day a week and so I’ve been spending time going through data and working out how best to hold conference calls.  This means I need access to the internet on a weekly basis, which will restrict what we do and where we go this year somewhat, but so far so good.  This is another reason to stay here – internet access is easy.

So, overall we are re-adjusting well to boat life.  We miss Charlotte, but I know she is happier at Fat Camp this year.  Hopefully my parents will survive having her for 6 months!  Fingers crossed.
Posted by Gary and Karina at 11:07 AM