Well, we tried to go North.  We really did.  Even though people who’ve been sailing the Sea for years told us not to try at this time of year… It turns out they knew what they were talking about. 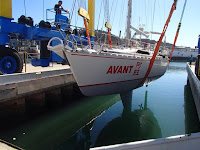 It started off so well…  After seeing Rob and Debra’s boat Avant safely put back in the water, and after having a final celebration, our happy group of Greybeard (Bill), Kialoa (Scott and Tanya) and Avant (Rob and Deb) finally split.  Kialoa, Greybeard and Sea Rover headed north, leaving Rob and Deb in Guyamas to finish putting together their “kit boat”.

We had a great motor and sail from Guaymas to San Carlos.  The Sea of Cortez welcomed us back with a dolphin and whale show, just to remind us of what we missed over the summer.  After a pleasant afternoon getting the kinks out of the boat (ie, fixing the autopilot, learning the speed gauge wasn't working etc) we arrived in San Carlos (about 15nm north of Gyuamas) just in time for their afternoon blow and got to practice anchoring in tight spaces in 20 knots of wind.  Ah yes, I remember this Fun.  We spent the next day doing boat jobs (cleaning the hull, installing holders for our dingy paddles, sorting out a halyard issue, getting our speed gauge working).  We also met up with Cruising friends Phil and Deb on s/v Coastal Drifter, who were the first other Cruisers we met last year on our way down the coast – we waited out weather together in Port Angeles, Neah Bay, and met for the final time in Astoria.  It was great to catch up and to hear how their first year of Cruising had been.  They are an interesting couple as each year they take a couple of their grandkids sailing for the year with them.  Last year we met Savannah and Sierra, and this year we met Ethan.  He gets to sail to Tahiti with them – lucky kid!

The group split again the next day, with Kialoa and Sea Rover heading north, leaving Bill in San Carlos waiting for a weather window to cross the Sea.  We had an uneventful motor in calm seas to Bahia San Pedro, which is a lovely little bay about 15nm north of San Carlos.  We took advantage of the calm weather (the anchorage doesn’t have great protection from the N or S) and spent the next day exploring the sea caves outside of the bay, and hiking to the top of one of the mountains to get a view of the coastline.  After 90 minutes of picking our way up through cactus bushes and other equally prickly plants, we made it to the top and were rewarded with a spectacular sight.  You don’t get a sense of all the little indents and fingers along the coast when you are traveling at sea level!

As the weather was still forecast to be calm, we headed out the next afternoon in 10 knots of breeze (from the north) and sailed up another 20 nm up the coast to anchor off a little village in Bahia Colorado.  Our guidebook didn’t have much to say about the bay, but they did show a picture of the bay filled with fish boats.  Usually this means it has some protection from the wind and seas.   As it turned out, it was protected from the wind, but definitely NOT the seas.  This turned out to be the worst anchorage we have ever stayed in!  The swell was horrendous.  The boat rocked back-and-forth, back-and-forth, back-and-forth, all night long.
Things that haven’t moved in 4500nm of travel were knocked loose that night.  For example, the picture over the bed leapt off the wall and tried to de-capitate me, the cutlery in the cutlery drawer spend the night banging to get out, the tools did their best to escape their cabinet (they finally broke free the next day – but that’s another story…).  We finally succumbed to sleeping on the floor crossways in the salon in an effort to rock WITH the waves instead of at right angles to the waves.  Needless to say we were gone by 5am (Kialoa only made it to 4am before they couldn’t take it anymore).

After our early departure, we headed out into what should have been reasonably calm conditions.  Should have been.  But weren’t.  Kialoa had already turned around and were headed south back to San Carlos by the time we were motoring out of the bay.  We forged ahead though, as Gary really wanted to get up to Tiburon.  We sailed our rhumb line close hauled in about 10 knots of wind for a couple of hours and made good time.  The seas were pretty lumpy, but not unmanageable.  Then, all of sudden the boat heeled over at an alarming angle (!) and we are doing 7.8 knots upwind!  Can anyone say ‘over-powered?’  The wind had jumped up to 15 knots and caught us off guard.  (This is when the tools in the cabinet finally made their break for it).  After reefing the boat and getting things more or less under control we took stock and realized all of a sudden the seas were a LOT bigger than they had been… But still we sailed on.  The wind increased to 16 knots and we reefed again.  The seas got bigger.

We then started talking options.  We were still about 20 nm away from our destination and could have made it, but it would have been a hard sail.  And there was no guarantee of safe harbour once we got there.  I need access to internet for work on Saturdays and Mondays.  We were pretty confident we’d be able to get internet on Saturday, but given the weather we were seeing starting to set up (ie, a strong Norther being being stirred up by hurricane Sandra), we would have had to be somewhere safe by Saturday night.  Unfortunately the closest safe harbour would not have internet.  So, to ensure that I would be able to make my Monday morning conference calls over the internet, we turned around and started heading south for Santa Rosalia, 64 nm away.  We were going to cross the Sea of Cortez.

At first this seemed like a good decision.  The wind decreased a bit and we sailed along nicely on a beam reach.  Then the wind built, and the seas built, and built, and built.  While a beam reach is a really fast point of sail for us and the boat loves it, it was a really uncomfortable point of sail as the seas were smacking us squarely on the side.  The good news is that the piles of dust we had accumulated while sitting in Guyamas  got washed off, the bad news is that the dust was replaced by salt.  The next 6 hours were interesting as we braced against the violent, steep, choppy seas.  At one point I looked down as a blur went past the companionway.  It was Gary getting thrown from one side of the boat to the other while trying to make lunch.  Luckily he landed on the settee.   We were handling the conditions OK, but were both a little worried about what would happen once we got to the Baja side of the Sea, as conditions were forecast to be worse over there.  And Gary was feeling sea sick (believe it or not, I was actually OK).  As it turned out, the wind and seas calmed down significantly when we were 20 nm from the Baja shore.   Instead of galloping along at 7.5 knots, we started to do a sedate 4-5 knots with the wind and seas more at our back versus the side.  A much more comfortable ride.  It gave us a chance to get some rest (remember, none the night before) and eat some food… All good things.

We pulled into Santa Rosalia at about 10pm after a very long 95 nm day of sailing.  Of course
Myrtle, our engine, decided to pull her “I don’t like to have water running through my body to cool me” trick when we turned her on just outside the breakwater, which meant we had no engine. Did I mention it is dark?  So, we had a few exciting and tense moments doing donuts outside the harbour with me trying to keep the boat level in the 4 foot swells while Gary was down below pulling off pipes and sucking out salt water with his mouth.  He finally got her to go (magician) and we made a dash into the harbor.  We docked at the marina, and collapsed in exhaustion.  I guess we’ve done our shakedown cruise this year.  We certainly felt shaken and stirred after that one.  And we now have a new list of repairs that need to be done...

We’ll spend the next week or so in Santa Rosalia doing boat jobs and working while we wait for the next weather window to head south.  The wind has already started and so we've had to use every dock line we own to keep our boat off from being squished on the dock.  Once the weather improves, we hope to rendezvous with our sailing buddies again.  Probably some time next week.
Posted by Gary and Karina at 4:33 PM