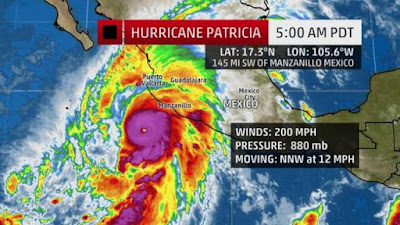 Well, who would have thought that come December we'd still be thinking about going north in the Sea of Cortez.  But its November 24th and that's exactly what we are doing.
The weather has been all messed up this year due to the strong El Nino and while hurricane season is usually over by now we've just watched Tropical storm Rick die out and now Tropical storm Sandra is spinning up, expecting to be a hurricane in the next few days.
While Sandra will be no Patricia (the strongest Hurricane ever recorded) which somehow managed to miss all the big Mexican coastal cities, Sandra will be something for us to watch.  Also, the lull from Rick and Sandra spinning up has made it unusually possible for us to get some Northing under our belt.  As such, north we go.  We hope to make it up to Tiberon, an island about 75 NM north of San Carlos but we'll have to see how the next few days go.  If we cant get any sailing in we might just stay put somewhere or head south or maybe west.  That's the beauty of our plans this season....  We have none.
Posted by Gary and Karina at 1:26 PM