Here are a few more memorable moments from our travels in the northern Patagonian channels this year. 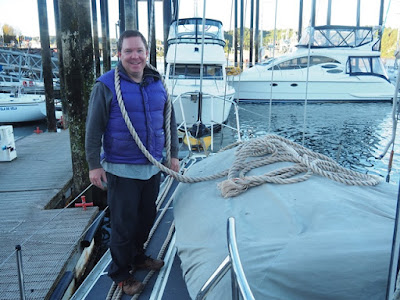 We anchored in lovely Caleta Lynch one sunny afternoon and decided to take the sea kayaks out for a paddle to enjoy the nice weather (and to try to find the rock we’d almost hit with the big boat on the way into the bay).  While paddling close to shore and admiring the sea life below us, Gary spotted a tangle of line hung up in a bush on shore.  He paddled over to investigate and discovered that the line was in perfect condition.  He decided he had to have it.  He beached his boat and waded over to the tangle.  He dragged the line into the water and started to sort it away from the branches it was caught up in.  He pulled, pushed, and pulled some more.  It took a long time, but he managed to salvage 50m of 1 inch line.  Ignoring my queries of “what the hell are we going to do with that?”, he draped it over his shoulder and managed to get it coiled into a neat package.  A BIG package.  Being too big to tow with the kayak he returned in the dinghy to claim his prize.  We then had to use the engine crane to get it on board.  Once again he refused to answer my queries of what we were going to use it for.  It seems that doesn’t matter.  What matters is that we have it.  In case we need it. 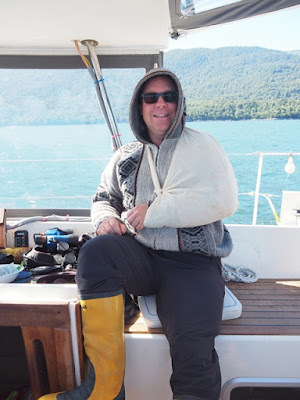 The next morning Gary woke up and realized he couldn’t move his arm.  He claims he dislocated his shoulder trying to pull the covers away from me during the night, but I know what really did it in.  The damn line!

He has now found a purpose for the line.  It will become 4 very large, very long dock lines that we will use to secure us whenever we leave the boat in the water for the season.

Interpreting the Guidebook and the Beauty of Technology

Guidebook writers must be a curious breed.  While they provide incredibly useful information in terms of what to expect in an anchorage or in a general area, they don’t always give that information in a straightforward manner.  We noticed this while sailing in northern BC, and it seems to be true down here in Chile as well.  Perhaps this only happens for books that cover more remote areas.  I’m not sure.

Words such as “tight” and “limited swinging room” could safely be re-written as “if your boat is bigger than 30 feet and has a draft greater than 4 feet, don’t bother even trying to anchor here”.  Minimum depths of 3m are clearly just a guide.  3m could just as easily be 2m… the reader is just supposed to understand it gets very shallow near that spot.  We encountered a new Guidebook term this trip: “irregular bottom”.  We, like most people, interpreted those words to mean that the depths would be uneven throughout the anchorage.  But, in Caleta Brooks, one of the bays we anchored in this season, they should have written “there are 5 uncharted rocks that lie 2.3m below the surface at low tide.  Beware as the depths change from 13m to 2.3m instantly.”  But alas, they left that for us to discover for ourselves… Note: Our keel draws 2.3m.

Luckily it wasn’t low tide when we entered the anchorage and so we still had 1m beneath the keel when we “discovered” the first, second and third rocks.  We had visual sightings on rocks 4 and 5 and so they didn’t pose any immediate danger.  As the rocks were virtually invisible until you were upon them, we wondered how we were going to get out of the anchorage the next morning as we were planning to leave right when the tide would be lowest.  We didn’t want our 2.3m keel to meet the 2.3m rocks.  As we clearly couldn’t just follow our GPS track out of the anchorage we needed to find a clear path out through the rocks in deep water.  So, out came the hand held depth sounder and we jumped in the dinghy.   I took both depth and GPS readings while Gary rowed us around the bay.

Having located several deep spots, we then attempted to map out a line of “safe passage” that would lead us out of the anchorage.  This proved very challenging as the person reading the depth and GPS position (ie, me) also had to make sure that the person rowing, who is sitting backwards, was rowing in a straight line.  Not sure how we didn’t get divorced.  But, miraculously, when we returned to the boat and Gary entered the GPS positions we had determined onto Google Earth (where, as it turns out, we could actually see the 5 rocks under the water), we had mapped out a perfectly straight line in the deep water between the rocks.  A miracle.  We then entered those waypoints into our chart plotter, and viola!  We had a safe path to leave the anchorage.  Of course, if we had looked at Google Earth BEFORE entering the anchorage all of this would have been a moot point as we would have known about the existence of the rocks and could have mapped them in advance.  Next time.