As our season comes to a close, we’d like to write a few posts to remember some memorable moments from our travels in the northern Patagonian channels this year.

“Are You Sure We Have Enough Gas?”

…I asked as we prepared to take the dinghy over to some hot springs two miles across the bay.  It didn’t look to me like there was a lot left in the tank.  “Of course”, the Captain replied. He then uttered words I’m sure he wished he hadn’t…”If we run out of gas I will paddle us all the way back”.  It is quite likely that we wouldn’t have run out of gas except we forgot to look in the guidebook at where the hot springs were before setting out.  We’d read the description earlier in the afternoon and both remembered it saying that the location of the springs was obvious as you could see steam coming off the water.  Obvious.  As it turns out, it was obvious when we were 100m from them.  At a distance greater than 100m, not so much.  So, we wasted a bit of gas motoring along the shore of the bay while looking for the springs.

We’d already had a frustrating day of trying to decipher our Guidebook.  We’d chosen an anchorage based on to its proximity to the hot springs.  The book listed the minimum depth as 3m (we draw 2.3m), but it looked pretty tight in the diagram of the site in the book.  It turns out that 3m was more like 2.4m (we saw 0.1m beneath the keel), and we would have to anchor on shore to fit our boat into the ‘preferred’ anchor spot.  After a very slow traverse around the anchorage trying to avoid running aground, we opted to anchor in deeper water outside the anchor location listed in the book.  We found a reasonable spot (ie, in 18m of water) and dropped the hook.  Hmmmm, did we catch a rock?  Something didn’t feel’ quite right about how the anchor set.  Oh well, we figured we’d deal with it in the morning and decided to treat ourselves with a trip to the hot springs before dinner. 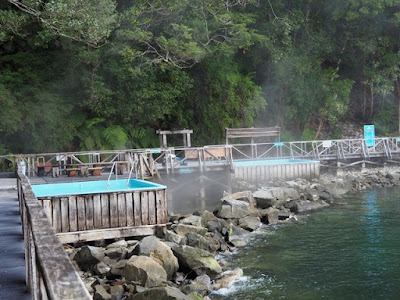 After much searching, we did finally find the springs.  They weren’t the natural springs described in the Guidebook – instead we found a dock, two concrete pools and a boardwalk.  And a bit of steam coming off the water.  But, hot springs are hot springs so we went for a soak.  They weren’t as warm as we expected, but it was lovely all the same.  Our relaxation was interrupted by the Chilean fish boat “Klio”, who are apparently the custodians of the springs.  Two of the guys came over to talk to us.  From what we could understand, the springs were only open to the public Thursday through Sunday (it was Tuesday) which was why they weren’t very hot.  They said it was ok to have stopped and gone for a swim, but warned us that the springs might not be as ‘clean’ as they’d be during the weekend.  We didn’t break out in any horrible skin diseases later so I guess it was fine. 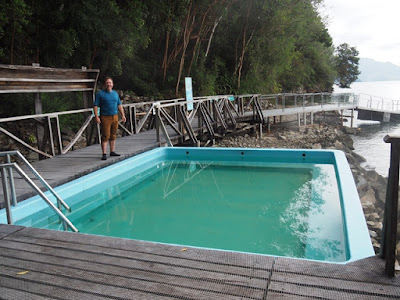 By the time we finished our conversation with the fishermen, it was starting to get dark.  Time to head across the bay (2 miles) back to the boat.  We zipped out of the anchorage and flew across the calm waters at top speed.  We almost made it.  About 0.5 miles from the island group where Sea Rover was waiting the dinghy came to an abrupt halt as the last of the gasoline was gobbled up by the outboard engine.  There was not a drop left in the tank!

The Admiral didn’t say the words she so wanted to say, and instead sat very quietly while the Captain said several bad words.  After a few moments of utter quiet, the Captain picked up the paddle and started to move us towards shore.  Now normally running out of gas and having to row back wouldn’t be a big deal except our dinghy oar system was completely broken.  The oar locks that were initially attached to the boat were pretty mickey-mouse and finally fell off in Easter Island.  We attached new, better oar locks at the beginning of this season, but we hadn’t yet drilled holes in the oars to make them operational.  Instead, we’d been using one of our kayak paddles for the minor bit of rowing we were doing between the boat and shore.  It worked great…over short distances.  As a long distance paddling tool in a dinghy without a seat (in our haste to leave for the springs we’d forgotten to re-install the bench seat), it left a bit to be desired.  But, Gary was game.  After all, he did say he would paddle the entire way back if we ran out of gas…

It was a long hour.  Thankfully it was calm and the moon bright.  We arrived back at Sea Rover just as the dark was setting in for the night, both tired and hungry.  Next time we will bring the spare gas tank.

We were waylaid by weather on our way down to Laguna San Rafael and ended up anchoring in front of a Hermit’s cottage in a tiny bay for five days.  We spent the time between rain squalls and wind watching the Hermit’s three dogs, three pigs and a goat follow him around the bay.  The Hermit would row his boat along the protected shore of our bay while the animals followed him on shore.

On day one the Hermit waved to us.  On day two he rowed over to say hello.  Or so we think, as his Spanish was completely unintelligible to our ears (as ours was to him).  We ended up nodding and smiling at each other before he finally paddled away.  On day three we met up with him when we were out in the dinghy testing out our new dinghy oars (finally got them sorted out) and he was out in his row boat.  He had just been to check the stationary fish net he had installed in one corner of the bay and he offered us a fish.  We said yes and thanked him profusely.  He then gutted it for us, handed it over and rowed off with a wave.  We shared the fish with our friends on Rum Doxy and all decided to thank the Hermit by taking him some provisions the following day.  Mike from Rum Doxy speaks Spanish and would act as our interpreter.  Annette made the Hermit some cookies and we gave him a loaf of banana bread and a can of spam (don’t ask why that was on board).  I felt bad giving him the spam but really wanted it off the boat…

Our trip to his hovel was an experience.  He met us on the beach (with the dogs, the pigs and the goat) and all of us (including some of the animals) traipsed into his house.  It was basic, as you’d guess, but had a lovely wood stove.  An old ‘girlie’ calendar was the only decoration, and he had a few basic pots and pans. There was a pot of gruel over the fire that he said he kept going and added to daily.  He offered us matcha tea, which we kindly declined, then we had a little chat.  It turns out he has been living in this remote spot for 22 years.  He moved there after his wife died and his daughter had grown.  A boat stops by every 15 days to deliver provisions, and he enjoyed his solitary existence.  He’d lost one of his pigs to a puma earlier in the season and he was either looking for a gun or had found a gun to deal with it – we weren’t sure.  He said a lot of other things in the hour we were there, but Mike could only understand every 10th word or so.  It sounds like he speaks to most of the boats that anchor in the bay on their way down to Laguna San Rafael and so he has a fair amount of human contact in the summer months when people are traveling to the glacier.  I can’t imagine what it would be like there in the dead of winter.  An interesting existence. 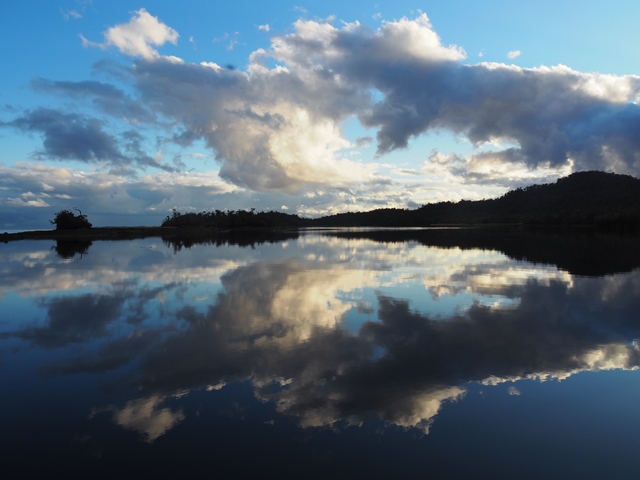