Why We Love the Sea of Cortez

While we are really glad we spent time on the mainland Mexican coast this year, we’ve been reminded these past two weeks of why we love the Sea of Cortez. 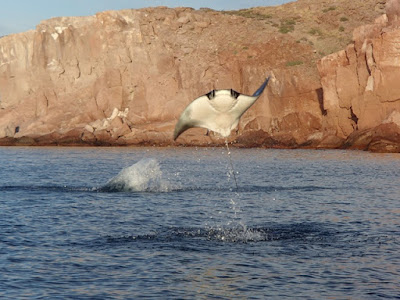 Mobula rays are a type of manta ray that frequent the waters of the Sea of Cortez.  Typically they travel alone, and can often be seen leaping out of the water for reasons unknown.  Unfortunately there hasn’t been a lot of research done on these wonderful creatures and so many of their behaviours are a mystery.  While we’ve seen many rays in our 3 years in the Sea, this year was spectacular.

It turns out that April is ‘mating month’ and so the rays have been congregating in huge groups.  The group circles under the water while several rays at a time leap out of the water and do a belly flop.  We speculate that this is part of the mating ritual – may the best belly flop win!  The rays then seem to pair off and there is a frenzy of activity on the surface as they ‘chase’ each other around.

My friend Tanya and I happened upon one of these groups while kayaking off of Isla Espiritu Santo a few weeks ago.  Being pre-occupied, the rays let us get quite close, while they traveled underwater in a tight circle.  I kayaked into the middle of the fray and was caught in the whirlpool caused by their circling.  They spun my boat in slow circles for at least 2 minutes.  It was a magical experience.  Unfortunately neither of us had brought our cameras with me that day... 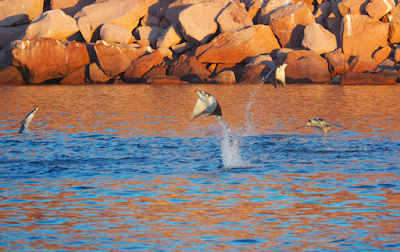 As luck would have it, we’d been lucky enough to encounter a number of these ray groupings over the last few weeks.  It is just nice to sit and watch them, which Gary and I have been able to do in pretty much every anchorage we’ve gone into in the last 2 weeks. 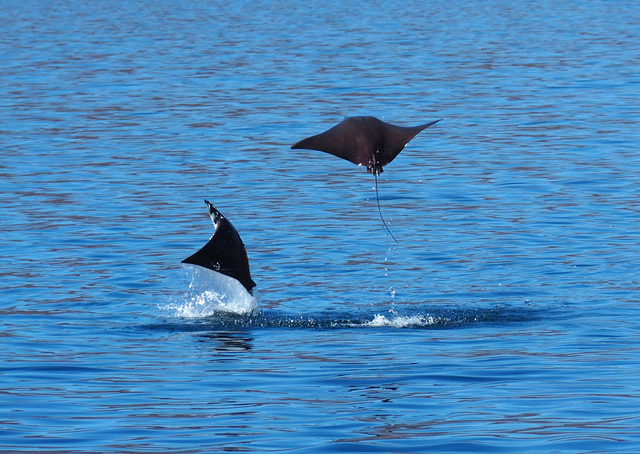 2.       Grebes
Grebes are pretty common in the Sea of Cortez, but there seem to be more of them than usual.  They have provided endless entertainment as we’ve watched them all dive as a group, and come up as a group.  Some of the groups we’ve seen have been huge – up to several hundred birds.

3.       Dolphins
Despite all the dolphin shows we’ve been privy to in the last 3 years, it is still a thrill when a pod stops by to play.  Spinner dolphins are especially fun to watch as they like to leap out of the water around the boat. 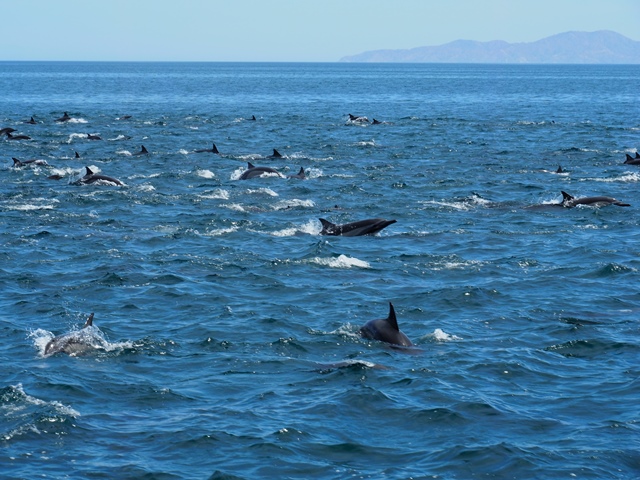 4.       Whales
We’ve been lucky in the whale department these last few weeks as well.  On a quiet motor a few days ago we encountered a curious Minke whale.  He surfaced just off the port side and so we stopped the boat and floated while he circled us 3 times.  On his last pass, he was less than a boat length away.  While only about 30 feet or so, he was still very impressive.  I’m glad he was only curious! 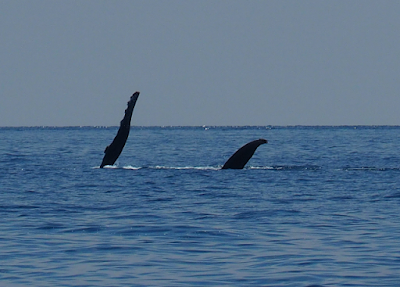 We’ve also seen a number of humpback whales on our trip north.  We’ve seen them leaping and slapping the water with their fins.  All very cool. 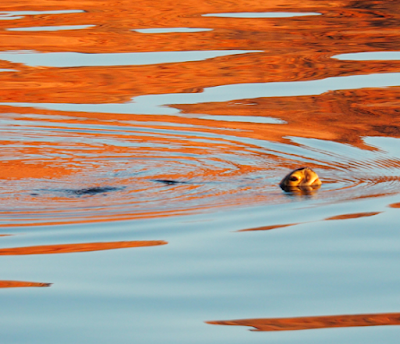 This has been a great year for turtles.  We’ve never seen so many, both in the south and in the Sea!  Every anchorage has had at least 2  turtles swimming around.  I spent one day trying to get a good picture of one, but they are shy creatures.  Sorry, the picture here is the best I got. 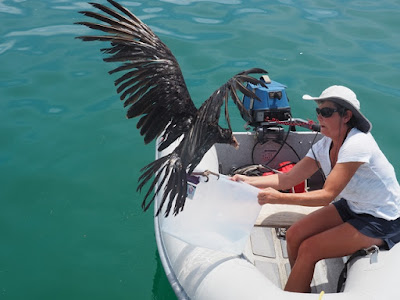 This morning the cry of gulls brought Gary and I up to the cockpit, where we watched a couple of gulls force a vulture into the water.  Vultures are not sea birds.  They aren’t very good swimmers and can’t take off from the water.  So basically the poor guy was screwed.  The gulls continued to dive bomb the poor thing while he bobbed in the water.  He eventually doggy-paddled his was over to our boat and seemed desperate to get out.  Gary got a bucket and I got into the dinghy.  The vulture came right over to me and latched onto the side of the bucket.  I then semi-scooped him out of the water while he clung to the side with his wings spread wide for balance.  The gulls looked on in disgust. 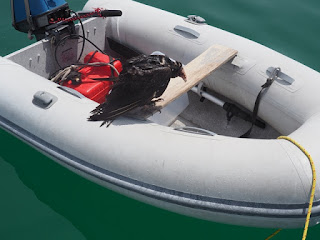 Now what?  I was sitting in the dinghy with a huge vulture on the other side of a bucket from me.  I gently put the bucket in the bottom of the dinghy.  While he made a move from the bucket to the dinghy seat, I made a hasty retreat.  He then sat on the dinghy seat looking pathetic for the next few hours while his feathers dried.  The gulls were incredibly persistent and continued to dive bomb him at regular intervals.  If we heard them coming, either Gary or I would go and stand on deck, which would deter the gulls from a full attack.  I don’t think we made any gull friends today.

After about 3 hours he did a test flight and landed on the solar panel.  After a quick thank you, he took off for shore, with about 5 gulls in hot pursuit.  The gulls forced him back into the water just as he got to shore, but he managed to crawl up onto the rocks.  The last we saw he was cowering beside a rock while the gulls continued to harass him. 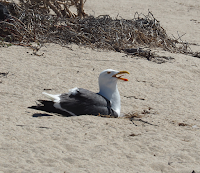 The lesson here:  don’t piss off a gull.  They know how to hold grudges. 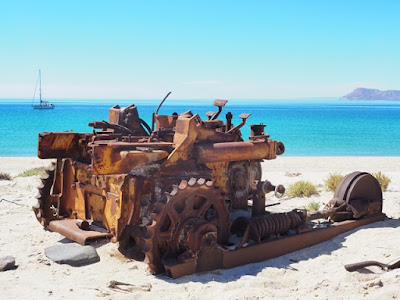 We toured 2 separate abandoned salt mines over the last two weeks.  We enjoyed poking through the old buildings and looking at the abandoned equipment.  Both mines closed in the 1980’s and it was amazing just how poorly the buildings have fared.  A good reminder that everything returns to dust at the end of the day... 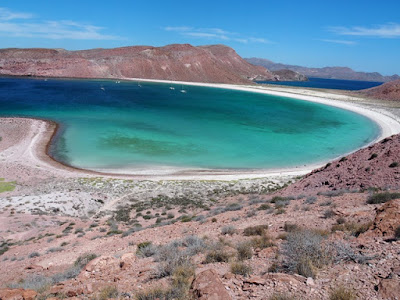 Our time here is almost up.  Tomorrow we will cross the Sea of Cortez back to Guyamas, where we will work furiously for the next week to put the boat to bed for another year.

Overall it has been a great season.  We travelled to some wonderful new areas, swam in warm waters, made new friends, experienced a ton of wildlife and traveled some major distances (roughly 3300 nm).  Unfortunately we didn’t end up sailing as much as we’d have liked, but the gentler weather we experienced instead has been a nice change.  We’ll definitely miss Mexico next year when we leave to explore countries further south.