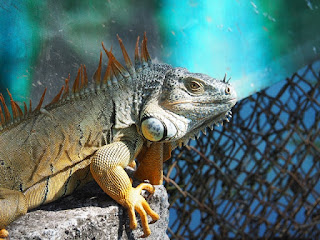 After a cold and windy season in the Sea of Cortez last year we decided to travel south in search of warmer weather and warmer seas.  I’m happy to announce that we have been successful in our quest and have spent the last 3 months on the Mexican mainland coast between San Blas and Manzanillo. 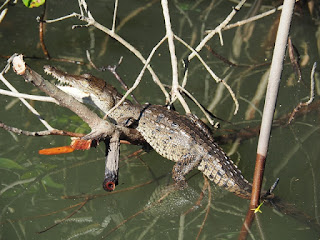 We arrived in the area mid-December, and after a quick trip to La Cruz (near Puerto Vallarta) to visit friends, headed up to the town of San Blas.  We spent a week working on the boat and exploring this lovely little Mexican town.  While we were there I convinced Gary to do an inland river to tour to see the crocodiles that populate the area.  The tour did not disappoint!  We saw several baby crocs as well as a couple of the big boys.  The tour turned around at a crocodile reserve where you could get up close and personal with your favourite croc with nothing but a chain link fence between you and the beast.  You could even pet them if you wished… 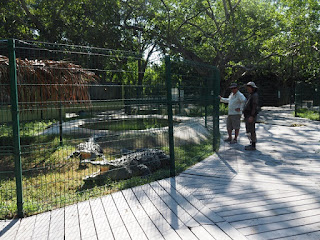 We left the boat at the marina in San Blas and flew home to Vancouver for a cold, snowy Christmas.  Gary returned in early January, while I suffered through the horrendous weather in the Pacific NW for another month.  I was certainly happy to return to the boat at the end of January!

Gary single-handed the boat down to PV, then tortured his cousin Karen with several tough passages 150nm south to Barra de Navidad.  Flight schedules (me arriving, Karen leaving) meant they had to sail south through several days of strong southerly winds.  Normally this is just an uncomfortable point of sail (my least favourite), but unfortunately the hatch in the salon got left open one of the days… and the bilge pump switch got jammed in the “off” position… and so there was a bit of a water disaster below decks.   Luckily they discovered the issue fairly quickly and so there was no major damage to any of the systems (thank god for lithium batteries), but there were a lot of things to rinse out and dry (ie, the salon cushion, all our log books, all our guidebooks, the lithium batteries etc).  Luckily the sunshine is hot and dry in this climate, so we had the boat back to normal in a couple of weeks.

I met up with Gary in a town called Barra de Navidad.  It is a wonderful place just north of Manzanillo.  It is the only completely protected anchorage on the mainland Mexican coast.  In addition, it has a fabulous marina attached to a world class hotel.  As the two halves of the town are located on either side of the lagoon, there is a flotilla of water taxis that service the area.  While they are there primarily to take the locals from one part of town to another, they will also take the Cruisers into town or back to the boat for a very reasonable fee (about $1 per trip).  Very convenient!  We split our time between the calm lagoon anchorage and the marina, where we enjoyed the pool facilities to their max.  It was expensive, but worth it!

One of the best things about Barra is the French Baker who sells his goodies from his panga 5 days a week.  He visits both the marina and the anchorage, which was both a good and bad thing, as we ate way too many chocolate croissants while we were there!

My friend Libby joined us for a week in early February.   We enjoyed the marina for a few days and then sailed up to a bay called Tenacatita, about 15nm north of Barra.  We put Libby to work doing some boat jobs (thanks for the anchor chain splice and winch cleaning Libby!) but also spent a few days snorkeling and enjoying the beach.  We survived several surf landings and didn’t manage to break her this year (except for a slightly damaged toe).  At some point she'll forgive Gary for the long walk into Colimilla when we could have taken a water taxi...

We decided Barra would be our turn-around point for the year.   We spent about a week back in Tenacatita after Libby left enjoying the daily routine of surf landing the dinghy to get to shore, walking the beach, playing bocce and hanging out at the palapa restaurant on the beach with all the other Cruisers.

Then a big up-welling from the ocean brought in a nasty algae bloom and dropped the water temperature by 4oC.  Clearly it was time to start heading north back to the Sea of Cortez.

We left Tenacatita during a period of unsettled weather.   Strong southerly winds, huge seas and thunderstorms were forecast.  While everyone headed south back to Barra for protection from the ‘storm’, we of course went north.   Luckily the ‘storm’ didn’t end up traveling as far south as originally predicted and so we were able to spend 2 nights in a ‘calm weather only’ anchorage called Paraiso.

Gary and Karen had stopped in this anchorage on one of their awful sails south the month before, and had spent a very uncomfortable night in this very tight spot with 2 other boats.  They also had our famous ‘no water through the engine’ issue on the way into the bay and so had to sail-to-anchor as the conditions were too rough to attempt to fix the issue in the open ocean.  Now, this anchorage is small.  When we entered the bay under very calm conditions I was worried we wouldn’t have enough room to turn the boat around without running into the rock reefs on either side of the bay.  Needless to say I felt pretty sick looking at Gary and Karen's sail track from the previous month on our chart plotter...  It is a testament to Gary’s good sailing skills that they and Sear Rover made it into the anchorage unscathed!

Despite the presence of a small hotel on the beach, the anchorage has a very remote feeling to it.  It is fairly open to the swell and so the waves tend to crash on the rocks surrounding the bay and on the beach.  As we were the only boat in the bay we were able to set a stern anchor to keep us pointed into the swell at all times.  As a result, we spent 2 pretty comfortable days exploring the area.  We kayaked and snorkeled, enjoyed a wonderful sunset and watched the bioluminescence in the water, as well as a lightening storm off in the distance. 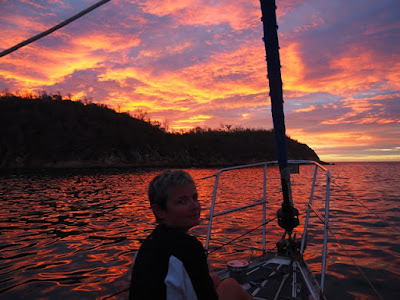 We felt like we were the only people on the coast (which we pretty much were as everyone else was in Barra or in Puerto Vallarta).  It was quite magical.

From Paraiso we moved on to a bay called Chamela, the last anchorage before you have to round Cabo Corrientes.  Being a Cape, Corrientes tends to have big winds and uncomfortable seas associated with it.  We liked Chamela so much we ended up spending a week there.  We made daily trips into the town of Perula for ice cream, despite the dinghy surf landing it required.   We almost flipped the dinghy upside down on several occasions, but luckily only managed to either fill the dinghy with water or get very, very wet.  All in all it was pretty fun.

As conditions were calm we spent one day anchored in a set of islands in the bay with the crews of Kialoa (Tanya) and Seadra (Ed).  Kayaking around the island with Tanya, dinner on the beach, watching thousands of hermit crabs pick apart a tortilla chip, and seeing an octopus while snorkeling were the highlights.  What an amazing place.

All too soon it was time to head north back up to Puerto Vallarta.  For once we managed to pick the right weather window and had a good upwind sail almost all the way to Cabo Corrientes.  We even heard whales calling through the hull!  The conditions couldn’t have been more calm going around the notorious Cape at midnight.  It was like glass.  The wind then picked up enough to enable us to sail up Banderas Bay.  We arrived and anchored in La Cruz at dawn. 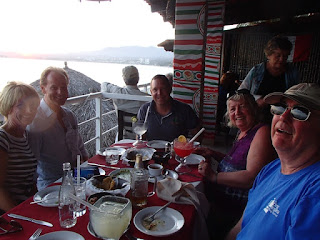 We’ve been based in La Cruz for the last 2 weeks.  My sister rented a condo in nearby Bucerias and invited my parents down for the week so we hung out with them and did boat jobs (never ending).  As La Cruz is a pretty rolly anchorage, especially in the afternoon, we’ve been treating ourselves to a week in the marina.  It made it much easier to get the family on board.  We are now just waiting for some repair work on our genoa to be completed (hopefully on tomorrow??), and we will start the long trek north back up to La Paz and then Guaymas.  Only 750 nm to go!

Despite being lovely and warm, with predictable afternoon winds and calm nights, the mainland Mexican coast is a challenging place to Cruise.  Unlike the Sea of Cortez, there are very few truly protected anchorages.  Most anchorages are fully open to the Pacific Ocean.  This makes for some absolutely stunning beaches, but means the anchorages are rolly and going to shore requires a surf landing in the dinghy.  At anchor, the boat never stops moving.  While this motion doesn’t bother me, it drives Gary bananas.   After a horrendous January battling contrary winds and rolly seas, Gary was pretty much done with this coast.  Luckily a few weeks of calm seas in Barra de Navidad, plus improvements to our “flopper stoppers” (which do just that – stop the boat from flopping from side-to-side at anchor) have helped to change his perspective and he has grown to like it here as much as I do.  The weather helps too.

We used to think that all the sailors that came to this coast for the winter were ‘wussy’ and that we were the tough ones by staying in the Sea of Cortez all season.  While the Sea of Cortez certainly has its challenges, travelling 900nm south and then 900nm north again 3 months later isn’t that easy either, as we are now discovering.

Overall, we are both glad we made the effort to come to this coast.  It has been a really rewarding trip.  We will certainly miss the warm water, sunshine and easy lifestyle next year when we leave Mexico for waters further afield...