The Zen (Not) of Passage-Making North

We spent the last week travelling 400 nm or so north from La Cruz on the mainland to La Paz on the Baja Peninsula.  While the passage seemed to take forever, it was about as good a passage as we could hope for when travelling north against the wind.

We broke the passage into 3 sections:

Leg One: A long day sail up to the town of San Blas, 60 nm north of La Cruz

We arrived at the river mouth at about 9pm and so had to negotiate the river bar and very shallow depths in the dark.  Our plan was to follow our old track on the chart plotter from when were where last there in December/January.  Unfortunately it appears that in the last 2 months the Navy had moved one of the channel buoys… you guessed it, to directly onto the path of our old track!  This caused a few moments of hysterics while I yelled at Gary to turn hard to starboard and he resolutely continued on the ‘track’.  The mounting panic in my voice obviously had an effect as he did finally turn to starboard… and we cleared the buoy by about 2 feet.

In San Blas we spent a day touring the old fort and learning about the history of the town.  Apparently at one time it was the biggest port for the Spanish navy in Mexico.  Hard to believe when you see it now…  We then had dinner with 10 other Cruising boats all staying at the marina.  We met a lot of new and interesting people.

We spent the morning motoring in calm seas while dodging long lines.  The winds then blew between 7 and 13 knots all afternoon from the exact direction we were trying to go, but we had a beautiful sail almost all the way there.  We had to turn on the motor for the last 2 miles as the island seemed to have a force field around it.  No matter what tack we were on, we kept getting headed away from the island… Thank god for Myrtle (our trusty diesel engine).  Upon arrival, Gary jumped in the water to survey the bottom for a sandy spot to anchor (the bottom tends to be mostly anchor-eating rock piles and so some reconnaissance was required).  We had the hook down and set just as the sun went down.

The next day I went to shore to check out the birds and lizards (Gary had a cold and needed to rest).  When we were here in December the frigate birds and boobies were all sitting on nests.  Now all the eggs had hatched and there were hundreds of fluffy white baby birds.  What is so amazing about Isla Isabel is that you can get within feet of the birds without them being afraid.  It was wonderful.

In the afternoon I coaxed Gary into the water for what will probably be our last warm water snorkel of the year.  The visibility was incredible and we were rewarded by swimming with literally hundreds of fish and one turtle.

The only downside to the island was the seas and swell.  Isla Isabel has 2 very exposed anchorages and so is susceptible to the whims of the ocean.  Conditions were extremely calm during our time there, but a slight SW swell made it uncomfortable, to say the least.  We kept joking that is was like we were already on passage!  Still worth the stop though.

As going north in strong winds is very difficult because of the short, choppy seas that you have to beat into, we agreed to do the passage in calm conditions.  This weather window was as calm as it ever gets.  There had been no systems in the Sea of Cortez for over a week, and there was no big ocean swell coming into the area.  Most of the boats travelling north chose this week to do the crossing.  We knew it was going to be a light air passage, but we agreed to sail whenever we could make over 3 knots per hour, and to motor the rest of the time.

We left Isla Isabel and immediately put up the sails as there was a bit of wind.  Unfortunately the wind was directly on the nose… But, we sailed anyway and slowly tacked our way up towards Mazatlan.  I think Gary was hoping to sail the entire way to La Paz, but after 13 hours of sailing that day and only moving 25 nm in the correct direction towards La Paz (out of 310 nm), it soon became clear that it was going to take us a lifetime to actually sail there.

I’m all about progress on a passage.  Yes, I try to be Zen about it - after all, we take our house with us when we sail and so have everything that we need to live.  But I just can’t get past not making way towards our destination.  So I guess I need to work on the Zen-thing…

Anyway, we turned on the motor and gave Myrtle a workout.  Conditions were bouncy in the evening, caused by seas left over by the afternoon winds, and then mellowed out to mill-pond-calm by morning.  Day 2 was much the same as day 1, but we only sailed for 7 hours in the afternoon (which got us another 10nm closer to La Paz).  Day 3 had no wind at all.  The sea was flat, flat, flat.  It was so flat that we actually transferred fuel from our jerry cans to the diesel tank while underway.  We were so bored that I actually agreed to play a game...

We had originally planned on stopping at an anchorage called Muertos, about 60 nm south of La Paz, but as we were going to get there after dark and we now had enough diesel in the tank to make it, we decided to keep going overnight all the way to La Paz.  We actually had a great sail up Cerralvo Channel and added another 20nm of sailing towards our destination.  We arrived in La Paz by 8am.

Overall the passage took 72 hours.  48 hours of them were under power (contributing to 240nm towards our destination) and 24 were under sail (contributing to 55nm towards our destination).  We basically used an entire tank of fuel to get us from La Cruz to La Paz.  Unheard of for us.  Gary is horrified over what this does to our sailing/motoring numbers this year, but I’m just happy we got here in 3 days versus 10.  Three days was definitely long enough.

We are now in La Paz, anchored in our usual spot off of the main marina.  We must be back in the Sea as the water temperature is down to 21oC, we’ve had to put on sweaters during the day, and it is blowing like hell (yup, a Norther). 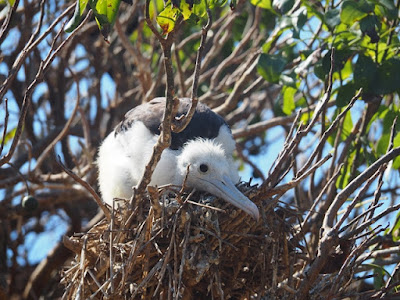 We will be in La Paz for 10 days or so finishing up some boat projects (like the stack pack for the mainsail we started sewing last year).  We will leave La Paz April 1st and sail with some friends from Vancouver who have rented a catamaran for a week.  We will then continue north up towards Guaymas and put the boat to bed by the end of April.  Hopefully we’ll start to see some southerly winds by the time we have to head north.  Fingers crossed.  Myrtle could use a break.