After torturing several sets of guests in Season Two, Gary and I decided to have an integrated swim platform added to the back of the boat over the summer.  We were getting the boat painted anyway, and the addition of the swim platform didn’t add a huge amount to the price tag.  In other words, it was a ‘good deal’.  Francisco, our fiberglass/painter wizard here in Guaymas, worked on the project over the summer.  Through a series of bad photos (usually with Francisco’s thumb in the way), we saw the swim platform come to life.  Sort of.  And then the really hot, rainy season came and, predictably, all work came to a halt.  To ensure the boat would actually make it back in the water before the new year, Gary drove down to Mexico at the beginning of October (before all the other Cruisers arrived) to prompt the work along.  Despite the incredible temperatures (>35oC, 24-7), the boat work got completed – the day before I arrived on October 29th!  The inside of the boat was in a complete state of chaos when I got there, but the outside looked incredible.  From the photos we’d been sent over the summer it was hard to imagine what the final product would look like.  I was very pleasantly surprised.  Francisco is an artist.  The new “back end” and paint job have totally changed the look of the boat, but she looks great.  Like a new boat!

Since the work took most of October to complete, poor Gary was way behind in getting the boat ready to sail.   He’d spent his days cajoling work out of the tradesmen and installing our new lithium boat batteries (not the catching fire kind).

An added pressure was that Gary’s cousin Karen was coming to visit on November 1st and she expected a sailing trip.  Needless to say my first three days in Mexico were a blur of activity while we sweated and fought to complete all the jobs needed for us to go back in the water (in 35oC+ temperatures).  This involved jobs like servicing all 14 through-hulls (many of which had ceased over the summer), hooking up the solar controller and re-plumbing the engine exhaust system, to name a few.  The boat was still in a state of chaos when Karen arrived, but at least we could see what needed to be done to be on our way.  We put Karen to work and spent the first 2 days of her holiday getting the boat back in the water, and then rigging her for sailing.  Miraculously we sailed out of Guaymas harbour on November 4th.  A new record! We only forgot to close one through hull and started taking on water as we motored out of the harbour, but Karen quickly discovered the water squirting out of the engine room and Gary fixed the issue.  Phew.

Our first trip was a calm motor in flat seas (unheard of last year!) 22nm north up to Bahia Algodones.  We spent a windy afternoon watching the kite surfers playing in the bay, then enjoyed margaritas at the “Soggy Peso” beach bar with a neighbouring boat. 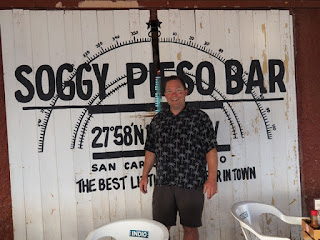 Karen swam to shore from the boat.  Quite idyllic.  It was also the inaugural use of the new swim platform!  It is amazing.  It is now so easy to get on and off the boat.  No more 5.10 climbing moves to get back on the boat after going for a swim!

After Algodones we motored north in choppy seas with 15 knots of wind on the nose.  Despite our slow progress, we got the water maker working and filled up the tanks.  We spent the next 2 nights in Bahia San Pedro, which is a lovely secluded bay about 10 nm north of the last civilization in Algodones.  We snorkelled and listened to the coyotes sing at night.
We met up with Tanya and her brother Jay on s/v Kialoa and spent an evening with them before she crossed over to the Baja side of the Sea.  As we’ve travelled so many miles with Kialoa over the last 2 years it was a bittersweet moment watching Tanya sail off into the sunset (literally).  We were so proud of her, doing her first passage without Scott and as sole owner/skipper of Kialoa, but we were also sad that an era seems to have come to an end and we aren’t travelling together anymore.  Hopefully we’ll catch up with her later in the season.

My work schedule dictated that we had to return to Algodones for internet access and so we had a very pleasant early morning motor back to civilization.  We watched the sun come up and provided refuge to one small bird along the way, who needed to rest his wings before flying further.  We spent the day relaxing, and  then had a nice sail back to Guaymas the following day. We are happy to report that the sails still work, and we even remembered how to rig the pole for wing-on-wing sailing (it always takes us 2-3 tries to get it right at the beginning of the season - this year, only 1 small adjustment was required).  We discovered an issue with the roller furler, which required a trip up the mast the next day, where we ended up having to take the genoa off so that the forestay could be tightened (which meant pulling the whole furling unit apart, of course), but we seem to have fixed the issue.  Fingers crossed.

We’ve been doing more boat jobs in Guyamas (sewing, re-wiring, re-fueling, re-provisioning) while we wait for our friend Bill on Greybeard’s crew to arrive early next week.  We’ll then travel north to visit friends in San Carlos, and will start making our way down towards the Mexican mainland, probably via the Baja coast.  We are storing the boat in San Blas (between Mazatlan and Puerto Vallarta) over Christmas and so we have a few miles we need to travel before then.

We are looking forward to some great downwind sailing. Our plan for the season is to make it down as far as Manzanillo, and then work our way back north to Guaymas again by April.  We hope to do a few multi-day passages to help get us prepared for next season when we finally leave Mexico and cross an ocean or two.