The Crew of Sea Rover II have had a few adventures this last week.  Last year when we were in Puerto Escondido in December, we hiked a bit of the Steinbeck Canyon, which is a lovely slot canyon up in the Giganta mountain range about two miles from the marina.  The canyon has beautiful rock formations and is full of fresh water pools in the fall after the summer rains.  After last year’s hike, we talked about how neat it would be to hike further into the canyon and spend the night.  So, this year we brought our tent and some camping gear with the intention of doing just that!

Tanya and Jay from s/v Kialoa joined Gary and I on our “land” adventure up the canyon.  We left the boats tied up to mooring balls in Escondido and left the dinghy locked to the dock.  We took minimal gear (tent, sleeping bags, thermarests, a few clothes - Tanya brought a pillow!) and Jay carried most of the food (he’s young and strong).  It used to be a relatively easy hike all the way up the canyon, but a hurricane a few years ago caused a change in the boulder configuration such that some climbing moves are required to get past the rocks a mile or so up the canyon.

This is where I (and most other people who do the hike) stopped last year, while the others hiked/climbed on.  This year Gary was determined to get me up there!  With a lot of help and coaxing from Gary and Jay (both mountain goats), Tanya and I completed the 4 “sketchy” sections required to move higher up the canyon.  Tanya had made the moves last year, but was still happy for the extra support again this year.  Thanks Jay and Gary!

The efforts were worth it.  As there hasn’t been as much rain this year, the pools weren’t nearly as full of water.  As such, most of the pools started just above the “sketchy” section.  We stopped to dunk our heads in the water and have a quick lunch, then continued up the canyon.
We found a nice flat area with some palm trees about an hours’ hike up the canyon, and set up camp for the night.  Tanya and Jay continued hiking (and were eventually turned around by a water chute, although Jay really wanted to climb it but was worried about getting his camera wet), while Gary and I lounged in camp and enjoyed the surroundings.

Humming birds, yellow butterflies and frogs.  Upon their return we played cards by headlamp, then made a campfire and ate all the food Jay had hauled up (the makings for quesedillas, chocolate, fruit etc).  It was a feast!  We talked long into the night then went to sleep under the bright moon. 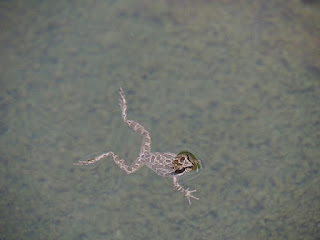 We didn’t see any wild animals, but the place was crawling (literally) with daddy long leg spiders.  Tanya had to remove 8 spiders from her tent before she could go to sleep as she’d accidently left the tent flap open.  Oops.
Our only other visitor was a stick bug, which climbed up Jay’s arm, then realizing he’d made a mistake promptly turned himself into a stick!

We enjoyed swims in several of the pools on the way down, and got through the “sketchy” areas again with Gary and Jay’s help. 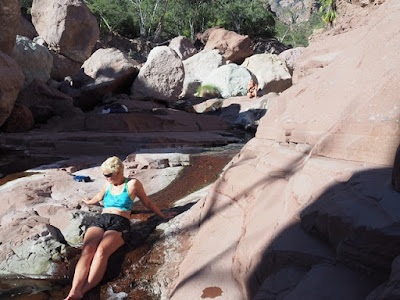 Tanya and I avoided the worst of the “sketchy” climbing moves by climbing down a small waterfall and swimming across one of the pools instead.  Much easier and less stressful for all involved!  The day was topped off by a stop at for ice cream on the long walk back to the marina.

We left Puerto Escondido the next day and sailed down to Isla San Francisco, one of our favourite spots.  While we were there, we put together my new Feathercraft folding kayak.  After an intense hour of figuring out how it went together, I was paddling around the bay. 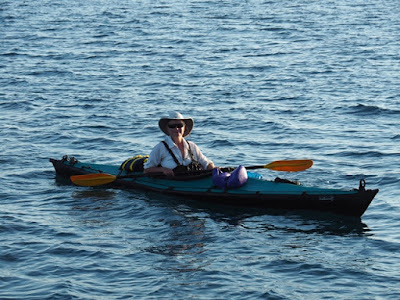 I had so much fun, I decided to “go for a paddle”, and proceeded to paddle around the island.  I’m guessing it is 5 or 6nm around, but I’m not exactly sure – it took 2 hours anyway.  It turned out to be a long paddle, mostly upwind, and then downwind in choppy seas.  But, it was a good test of the kayak – it performed really well and I am pleased.

We left early the next morning (ie, 4am) to sail to Ensenada del Candeleros on Isla Partida, the island close to La Paz.  We spent the day snorkeling the reef and cleaning the bottom of the boat, then left the anchorage at 11pm to sail to La Paz.  We were hoping to spend the entire night in the anchorage, but a Coromuel blew in (nasty nighttime west winds that cause huge waves to be pushed into all the bays in the Islands) and we literally got bounced out of bed.  We had a quick sail down to La Paz even though there was only 5-7 knots of wind and we were double reefed!  We couldn’t seem to slow the boat down.  She even sailed downwind in less than 4 knots of wind, which is very difficult for us to do under normal conditions.  Crazy sail!  Anyway, we arrived at the La Paz channel mouth at 4:15am and decided there was enough light to enter.  We anchored at 5:15am and then got some much needed sleep before I had to “go to work”.

We’ll be here for the next week doing some boat projects and catching up with friends, and then will look for a weather window to cross over to the mainland side.  Puerto Vallarta, here we come!