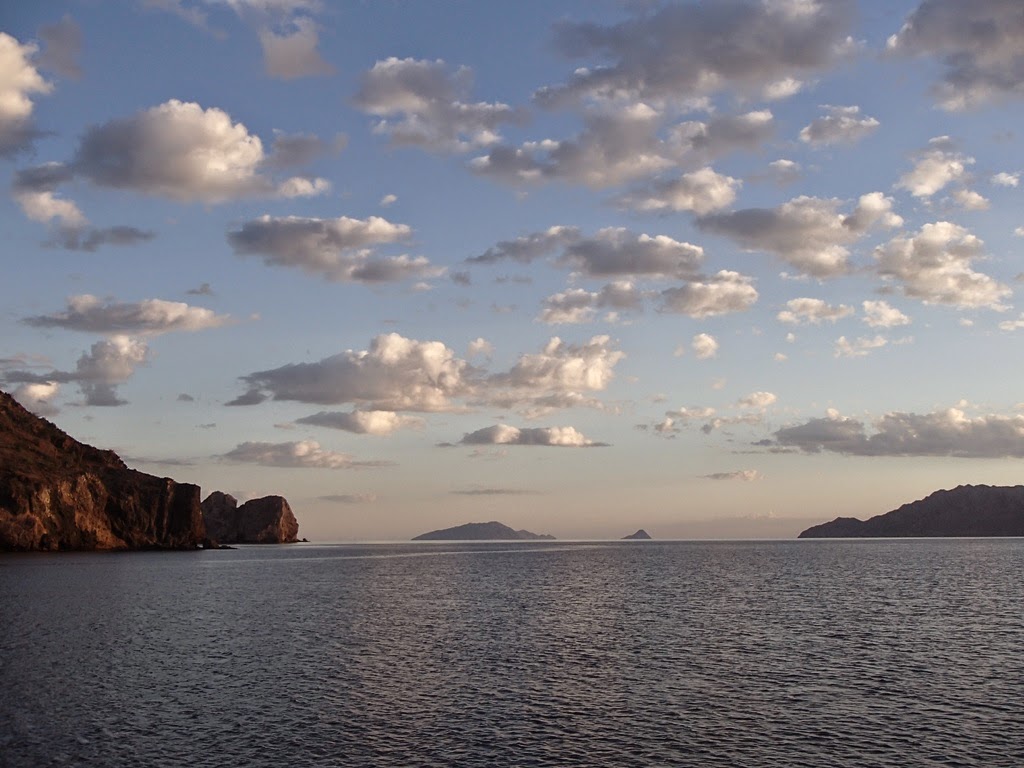 Now that we've finished with all our guests on board it's become time to start heading north for the last part of our trip this year.  We have a haul out date of April 13th in Guaymas which is about 300 NM from La Paz.  On paper it doesn't seem very far but we'll be fighting the north winds all the way....  Or so we thought...
We left La Paz in light northerlies under sail and through out the first day the winds slowly clocked around to the south.  For the next two days we sailed long days taking advantage of the unexpected perfect "going north" weather, sailing past our planned stops happy that we didn't have to use fuel.

For those that haven't kept up with our blog, winds in our favour is a very big deal for us here in the Sea.  Since we've arrived we've been told that winds are generally from the north.  Which has consistently been the case until we decide we had to go south.  Our mast head wind indicator has only functioned as a pointer of where we are trying to go, meaning the wind has been against us for the vast majority of the past three months.  For once the wind was perfect and we were enjoying every minute of it.

On the third day the sea gods figured we'd had enough enjoyment and decided to smite us.  The day started off pleasant enough under light sailing conditions, but slowly the winds increased from the north and the seas built.  Happy that we were still able to sail we reefed and deployed the padding to keep our bums happy.  Then the clouds grew darker.  Then the lightning and thunder started.  Then the winds and seas picked up more.  Then we decided it was time to get off the water.  The closest indent that offered any protection was Puerto Los Gatos, a small bay surrounded by jagged rocks.  We sailed right into the bay proud that we had survived the day.  Unfortunately the sea gods weren't done with us yet.  As we turned the engine on and dropped the sails we realized there was no water cooling our engine.  After a Chinese fire-drill of trying to decide what to do (remember there's a thunderstorm overhead and wind and big seas), we drop the anchor where we sit and shut the engine down.  We didn't get into the bay enough to offer complete protection so we were stuck with fun house conditions until the engine was fixed.

8 hours later in rolly, hot and humid conditions (those conditions always make me soooo happy and easy to be around), we had the engine back together after finding most of the pieces scattered in various parts of the complicated water cooling system from the rubber water pump impeller vanes.

This was the same issue we had on the west coast of Baja after another bumpy sail.  Somehow we are getting airlocks into our water cooling system that the pump cannot overcome.   We have some thoughts on changes to make in order to prevent it from happening again but for now we will just be vigilant in making sure water is always flowing out the back.

The next morning was a new day and the sea gods had finally focused their attention somewhere else.  We had a pleasant sail to Agua Verde and spent two days snorkeling and exploring the small remote community in search of their famous goat cheese.  Unfortunately it was a Sunday so most residents were at the church.  Given our recent history with the gods we decided not to press our luck and pull someone out of the service to sell us the cheese.  We did see many goats and surprisingly lush gardens for the desert.  Our first viewing of an actual "road runner" brought back great childhood memories.

After two days of rest it was time to move on again.  We made good distance in reasonable conditions with a small sailboat race mixed in.  We aren't sure if the other sailboat knew they were racing or not but we beat them anyway and anchored at the south end of Isla Coronado.  This was an island we had visited almost 15 years ago by kayak which had us reminiscing... well actually doing our best to remember any details of the surprisingly foggy memories.  I guess we are getting old.

Having made great time north we have caught up to a few of our sailing friends, Kialoa, Grey Beard, Falcon Seven and a new boat Victoria.  We all got up early and hiked the 900 ft up the extinct volcano for fantastic views of the surrounding area.  After that strenuous activity most of us retreated below decks for naps, except for Bill and Phil, who aren't human and decided they would catch us all dinner by spearfishing.

We had a pleasant sunset on the beach catching up with our friends adventures, and on the walk back with Karina in the lead surprised a rattle snake catching the last rays of sun on the path.  For some reason we don't have any pictures, but there was a lot of screaming and rattling.  In the end the snake convinced us to find a different way to the boat and all was well.

This morning we awoke to splashes and were treated to dolphins fishing and playing around our boat.  We've got light winds right now but hope for another southerly to pick up this afternoon which will carry us further north to San Juanico where we plan to spend a few days doing a few boat jobs.