2 Weeks with the Parents

We just finished 2 weeks with my parents on our boat which usually isn't big enough for Gary and I.  Surprisingly we survived with no blood lost and were still smiling at the end.  According to other cruisers this is some sort of record!

Here are some of the highlights from my parents visit the first 2 weeks of March:

Swimming with the whale sharks:
We hired a panga to take us out to the area where the whale sharks feed just outside of La Paz harbour.  There were 6 of us in total: my parents, Gary, me, and our BCA friends Jennifer and Campbell from Victoria who were staying on Good As Gold, plus Charlotte (they said we didn't have to pay for her as long as she didn't swim with the whale sharks!).  While the day was overcast, the seas were dead calm - perfect whale shark weather!

The panga trips work like this: the panga driver (who is supposed to speak English, but doesn't) drives around with all the other pangas in the area where the whale sharks are supposed to be. When he spots one, he guns the engine and drives over to it as fast as possible, with the hopes that he gets there before any of the other pangas. If he gets there first, the driver then yells at you to quickly jump in the water. You then hurl yourself off the side of the boat wearing your mask and snorkel (and wetsuit) and swim as fast as you can in the direction he is pointing in the hopes that you get to see one of the majestic beasts. Sometimes you see one, sometimes you only see the tail swishing away. We soon learned it was futile to try to follow them in the water, as they move way too fast. You then swim back to the panga and repeat the process. We all had one really good whale sighting, and multiple not-so-good sightings. But the one sighting was amazing. What wonderful creatures.

My 72 year old mother made it into the water three times, which was really good for her as it wasn't an easy entry or exit from the water to the panga. Good for you Mum!

Fishing:
We used my hand-fishing line to fish for tuna. Despite using a lure that everyone else we know has had success with, we of course, caught nothing. We blame it on Gary.

Kind strangers to the rescue! As we were sitting in the cockpit in the anchorage on Isla San Francisco having cocktails and contemplating what to make for dinner (since fish was apparently not on the menu), a catamaran drove into the anchorage and offered us a fresh-caught skipjack tuna! Apparently they'd been eating tuna all week and couldn't stand another night of it. We kindly took it off their hands! Dad had the honour of butchering it, and we cooked it like a roast (which is what the people on the cat recommended). It worked out great.

Dolphins in the bow wave:
While we've experienced this many times on our trip down the coast, it is still a thrill to have a dolphin come and play in the bow wave of the boat. This time was no exception. A singe pantropical spotted dolphin (a new species for us) came to play for about 10 minutes and gave us quite a show. Both my parents stood right up at the bow and watched the dolphin dart back and forth, while occasionally leaping out of the water. We only took video of this, so sorry, no pictures.

Time in the islands:
We spent 11 days sailing in the islands around La Paz. There wasn't a lot of wind, but we did manage to sail a fair amount.

We visited Bahia San Gabriel where we snorkeled and looked at the frigate birds; Ensenada del Candelero where we endured a rain storm, Caleta Partida (twice) where we enjoyed multiple dolphin shows, swims and some nice walks on the beach; Ensenada Grande (north and south lobes) where we endured some cloudy weather, but snorkeled and admired the rock formations; Isla San Francisco, where we walked on the beach, hiked up the ridge, looked for agate, and admired the crazy vegetation.

Watersports:
My Dad wanted to try out our stand up paddleboard.  Unfortunately he chose a day when there was a bit of wind. Luckily the water wasn't that cold... 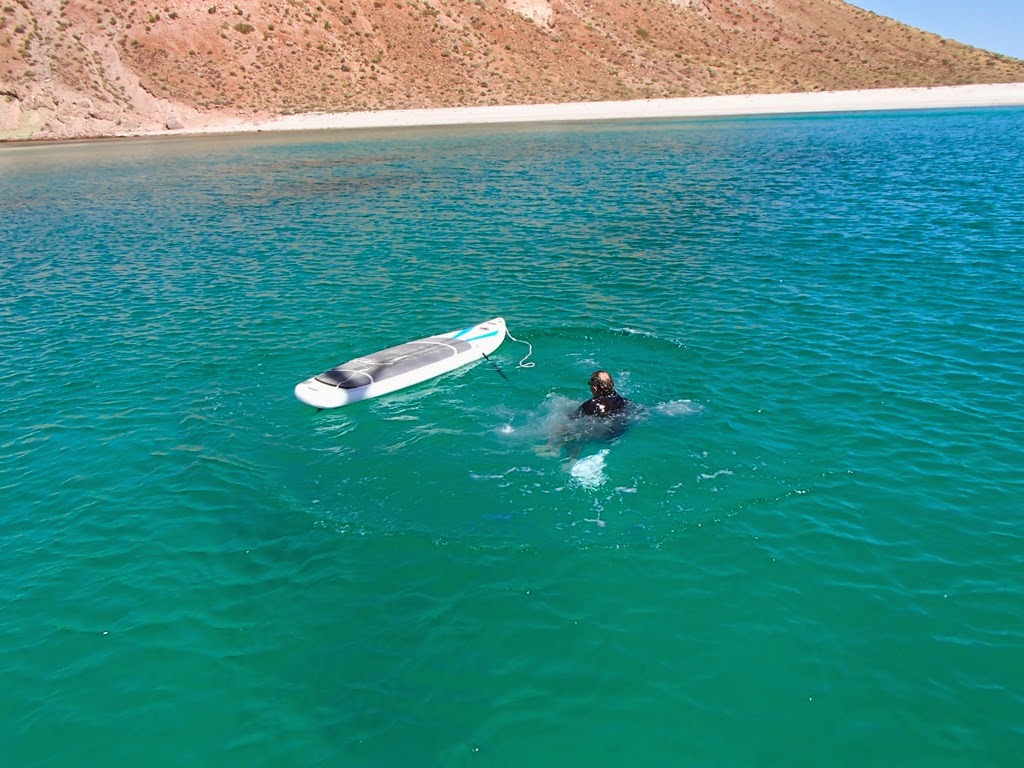 We had some very hot days, and so swims were a requirement.

Swimming with the sea lions:
We stopped at Isla Islotes so my parents could swim with the sea lions. At first Dad was keen to do it while my Mum was definitely skeptical. After brow-beating them both into the water, Dad wasn't so keen on the whole experience, while Mum thought it was fantastic. She and Gary cavorted with the sea lions for a long time. They tried to enter one of the big sea caves on the island, but were stopped by a very unhappy male sea lion who bared his teeth at Gary and chased them out. Good times. 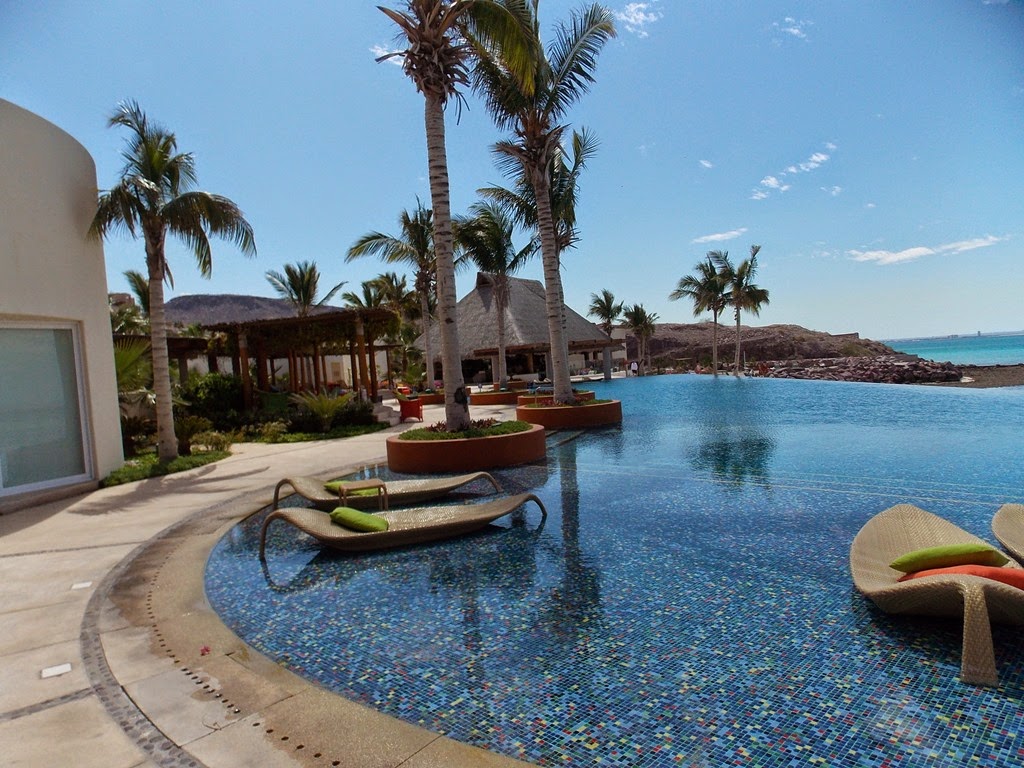 We spent 2 days at the end of the trip relaxing at the Costa Baja Marina and Resort. It was hideously expensive to stay at the marina, but well worth it as we got full access to their lovely Beach Club. The club includes an infinity pool, hot tub, pool side bar etc, and we took full advantage of it. We smuggled Charlotte into one of the beach palapas, where she slept happily in the cool breeze (until the after school kids arrived - then it was time to go!). In addition to a lovely pool and beach, Charlotte had all the grass she could hope for! It was fantastic.

Thanks Mum and Dad! 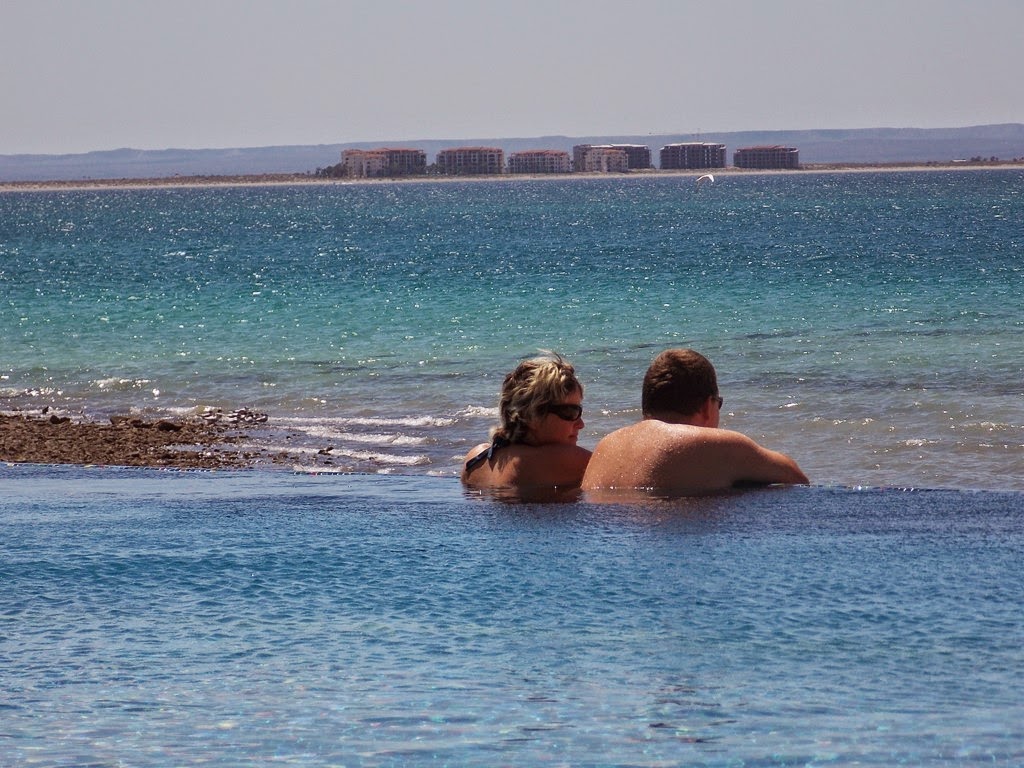 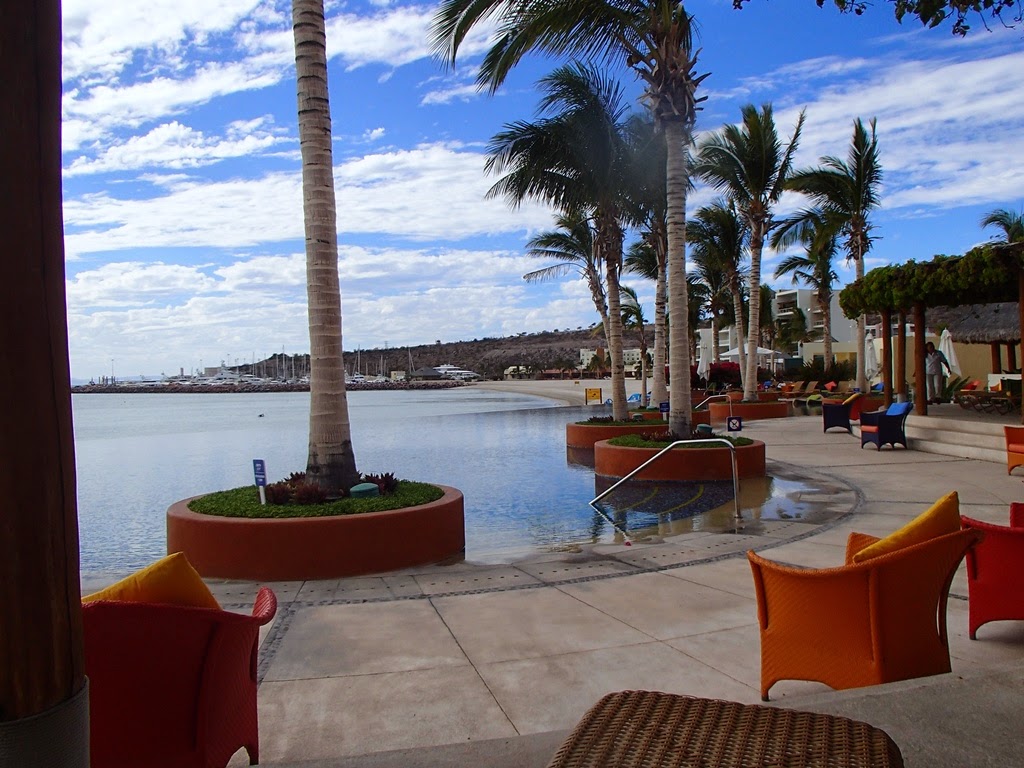 Extortion:
We rented a car to drive Mum, Dad and Charlotte to the airport in Cabo San Lucas for their flight home. It is well known in the Cruising community that Gringos are prime targets for the Mexican police, who are ultimately looking for a bribe. It turns out that we were no exception. We hadn't even made it out of town before we'd been pulled over for running a red light (complete bullshit - the light was green). We pretended we spoke no Spanish (pretty much true). After we told the officer we were on our way down to the airport he told us (in Spanglish) that if he gave us a ticket we'd have to follow him to the police station to sort out the charge, and this would take us several hours, so we'd probably miss out flight. We assured him we had the time to do this (we didn't, of course) and asked for the ticket so we could go to the station. He then conferred with his colleague, and then gave us a warning and let us go. From speaking to other Cruisers on the dock, this is pretty common. It seems if you insist on taking the ticket they give up and let you go. Interesting experience.

The storm:
We managed to unload my parents and the dog at the airport just before the heavens opened and it absolutely poured! Gary and I parked the car and made it into the terminal just before the torrential rain started. The rain was so loud on the terminal roof that we couldn't hear each other speak. The sidewalk outside the terminal flooded in about 2 minutes, and so travelers were taking off their shoes and socks so they could wade across the rapidly forming lake. It was crazy. I can't imagine what this place was like during the hurricane last September. At least this storm only lasted 20 minutes. Luckily the storm didn't affect their flight home, or our drive back to La Paz.