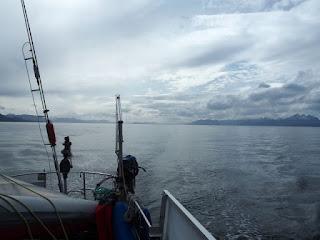 Way back as a kid, I learned a few things about a crazy guy who decided he wanted to sail around the world. This guy lived in the 1500's so things were a bit different than they are now. In fact one of the reasons he had such a hard time getting his expedition off the ground was that most still thought the world was flat. Fast forward 500 or so years and while we still have a few who believe the world is flat a lot has changed. We have satellites that give us exact position (even if the maps are sometimes a little off), a reasonable expectation of the weather to come, boats that can sail upwind or even motor and clothing that keeps us reasonably warm and dry while out in the elements. Magellan (or Magallenes as he's known to all but the English) had none of these things and worse yet he had to contend with a Spanish fleet that didn't trust him (he was Portuguese) and every place he went to reprovision had hostile natives that tried to kill his sailors. Somehow against all odds he still managed to find the fabled SW passage to the spice islands. It's no wonder one of the hardest places to sail on earth bears his name.
When we started thinking about sailing around the world, I read many books about those who had done it before. Famous sailors like Magellan, Drake, Cook, Slocum and of the more recent Moitessier were names that inspired many who went before us. Every book I read about someone sailing around the world included at least one of these names as a reason for leaving the safety of their home and venturing out in to the great wild blue yonder. As I was reading these stories about deserted tropical beaches, warm water snorkeling and unlimited sun downers all I could focus on was the names of those inspirees. Despite 500 years of history between them all of these sailors had one thing in common. They had all sailed in what is now Southern Chile. My focus quickly left the tranquil lifestyle I was initially thinking about when I proposed the sailing lifestyle to Karina and I said to her while pointing at a map... We should go there!
For all those who know Karina, you can imagine the response... "That's the dumbest thing I've ever heard". Fast forward almost 15 years and well, WE HAVE ARRIVED.
Crossing the strait and sailing the 100 miles down the length of this place so steeped in history had little drama for us. We left on the back of a pretty weak front and enjoyed a full 24 hours of pleasant downwind sailing. We saw stars for the first time this year and had two days of sunshine. Dolphins, whales and penguins leapt beside us. Albatrosses glided around us and snow capped peaks towered above us. After a couple months of tough sailing and some significant emotional lows we were now finally both feeling a clearly defined emotional high. We both agreed that it was good to come here and the many years of hard work both physically and mentally to get here were justified.
Now I sit here, safe and warm inside Sea Rover, writing this post. We are tied in with 2 anchors and 3 shorelines. 30 knots is currently blowing outside and 60 is forecast over the next few days along with the driving rain and sleet that always comes with the wind. I wish I'd had a way to record those feelings we felt less than a week ago. Luckily there are still some good feelings left over to tide us over until the next high (which might be in few days).
Posted by Gary and Karina at 12:14 PM

Email ThisBlogThis!Share to TwitterShare to FacebookShare to Pinterest
Location: Chile