All for a 10 cent washer

Lesson learned.  Doing a rig check is more involved than just going up the mast and checking all the pins, cotterpins, halyards, shackles screws, nuts and bolts.  Apparently you need to take your furler apart and give it a look as well.

Things we going well on our first night out on the west coast.  Sea's were a bit rough but we were both getting good sleeps (4 hour shifts) and we were sailing downwind with the hydrovane.

At about 2 in the morning the wind dropped so I furled up the jib and started motoring.  Without the pressure in the sails it was pretty rolly and by 5 am the wind had picked up enough for Karina to try sailing on her watch.  She got the headsail partially furled out but then it got stuck.  She called me up and we went on the foredeck to have a look.  Something didn't look right.  I figured the foil (which holds the sail in a track) had dropped down on the stay and things we jammed up.  We furled the sail back up, threw a second halyard forward for good measure and left it until daylight. 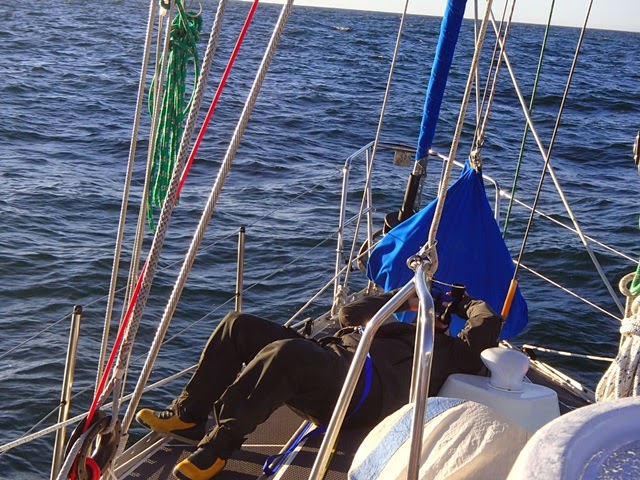 At 8 am I came onto my watch and first job was to have a good look aloft to see what the problem was.  In the light we could see something was very wrong.  I had Karina ease the jib halyard and when she did requested that she very (there might have been swearing) quickly retighten the jib halyard.  It was now clear that our headstay had parted and the only thing holding our rig up was the cloth on the headsail.  Many more halyards went forward and we starting plotting our course into the closest port.  Unfortunately that was the famed Columbia bar. 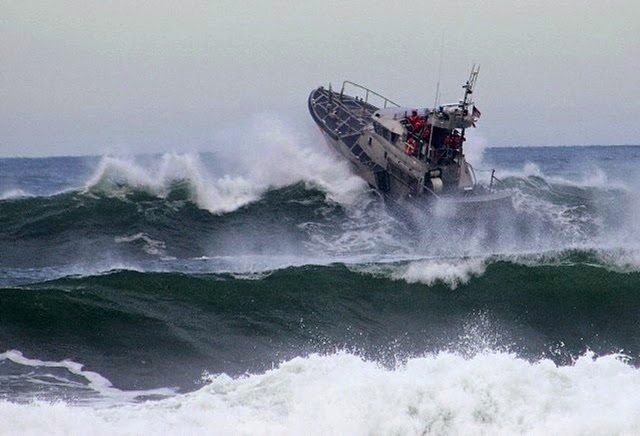 Picture one of the largest west coast rivers flowing out into a big open spance of the pacific ocean that has thousands of miles of fetch for waves to build and build flowing east.  The two meet and have a party (not the good kind).  Add that to the fact that its one of the busier freighter ports on the coast and you understand why it is feared (and avoided) by most sailors doing their first trip down the coast.

Luckily for us all was calm and we only had a 300 ft dredger take a run at us so we were able to arrive in Astoria safe and sound.

We lowered the stay onto the dock and found the reason our stay came free.  The sta lock mechanical fitting had unscrewed at the top.
After a good nights sleep we tackled sorting out what the problem was.  Up the mast I went to remove what was left at the top.   We then re attached the fitting, and raised the furler back up.  We removed the sail without using the furler (around and around) and then using slings, and knots known from our climbing days were able to attach it back into place at the top.

Back at the bottom of the stay we realized it was much longer than it should be.  3 screws and 4 bolts later we had the furler unit apart and realized our problem.  The mechanical fitting on the bottom had also come free.  In addition it was missing a very important 10 cent washer (which Harken demands you put in) that keeps the foil from undoing the mechanical fitting should it ever come lose and bottom out.  The good news is we know why everything came undone and will be able to fix it completely when we find a good rigger in San Francisco.
Many milestones have been past over the past 48 hours including 1st night in the big scary ocean, just the two of us, first rig failure, first rig repair, first west coast bar crossed.

All in all a good few days.

I must get to bed for our 3 am departure to get back out the bar so the story of Astoria will need to wait for now.
Posted by Gary and Karina at 9:40 PM