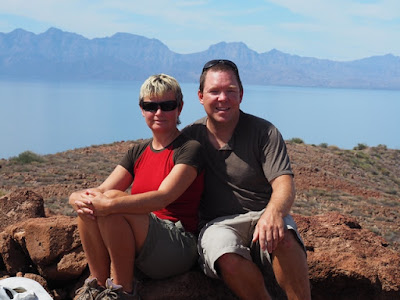 We’ve spent the last month in the Loreto area and north exploring different bays, hanging out at a fancy beach resort, entertaining guests (my parents, and my friend Libby), and sailing, sailing, sailing.

Prior to my parents arrival we spent almost a week in Puerto Ballandra, which is 9nm east of Loreto on Isla Carmen.  It is a lovely protected bay.  We enjoyed a few days of rest, then tired ourselves out with a big hike up into the hills to see if we could get some views of the other side of the island.  We made sure to wear bright colours to ensure we were visible to the hunters that frequent the island in search of big horn sheep (only in Mexico??).

After re-charging our batteries, we headed south to Bahia Candeleros and the Villa del Mar resort.  We anchored out front and used the facilities until it was pointed out to us that the wrist bands we were given by the hotel staff only entitled us to eat in the restaurant, NOT use the pool etc.  Oops.  Regardless, we celebrated Scott’s birthday (s/v Kialoa) there with appis on the beach and dinner out in the restaurant.  A nice treat.

We picked my parents up in Puerto Escondido and started a 100nm circle tour for the next 10 days or so.  The adventure started with an easy upwind sail from Loreto to Isla Coronado, a lovely island north of Loreto.  After enjoying some time with friends, we actually had a downwind spinnaker run up to San Juanico, a rare event as San Juanico is 20 nm further north!  We spent a few days in San Juanico waiting out the latest “Norther”, then did a very long 60nm sail down south to Agua Verde.  Some of the crew didn’t fare well on this passage as the seas were big and sloppy.  A hell of a sail though!

We took a much needed break in Agua Verde and celebrated my parents 50th wedding anniversary, and then Easter.  The normally quiet and remote village had been transformed into a mini metropolis as several hundred Mexican families descended on the beach for their yearly week-long Easter camping extravaganza.  They seemed to thoroughly enjoy socializing and playing in the water, and we enjoyed watching them try to get their fully loaded vehicles back up the very rough road at the end of the weekend.  Never say never in Mexico…

Another day of sailing took us back to the resort at Bahia Candeleros, where we celebrated Gary’s birthday.  After a sleepless night due to strong westerly winds on a lee shore (and a 2am rescue of the dinghy from the boat next to ours), we sailed back to Puerto Escondido and dropped the hook.  As my parents had had enough sailing adventures for one trip, we spent their last day touring the countryside in our rental car.


After dropping my parents off in Loreto, we pushed a weather window and sailed north up to the protected waters of Bahia Concepcion.  We covered only 80 nm run in 25 hours in what Gary describes as his second worst sail on record.  We beat into 10-12 knot NW and NE winds and BIG seas, hour after hour, after hour.  As each nautical mile gained going upwind was precious, Gary ended up having to sail almost the entire way, tacking once or twice every hour.  We were lucky if we made 3-4 nm forward progress every tack out and back.  One tack was tolerable in terms of boat motion (the tack we spent the least amount of time on), but the other was brutal.  We bounced so much and took so many waves over the front deck that it knocked our anchor loose.  Sleeping was impossible.  Eating was impossible.  Peeing was a major event.  After spending 4 hours within 10nm of Punta Concepcion (where we would be able to turn down into the bay and be in comfortable seas), we broke down and turned on the engine.  Gary said he would have turned it on earlier (a first!) except we’d started having that engine cooling issue again that plagued us last year and the beginning of this season.  Apparently our “fix” didn’t entirely do the trick.  As the issue only happens after we’ve been sailing upwind in rough seas, we figured there wasn’t a hope in hell it would work.  While Gary can get the engine going when the issue occurs, there was no way he could do it in the seas we were facing.  After a lot of praying, wishing and hoping, we turned the engine on.  The gods must have decided to give us a break as she started fine and ran without issue.  Phew.  Otherwise we’d probably still be out there tacking back and forth…

We then spent the next two weeks recuperating in Bahia Concepcion.  We hung out with our friends on s/v Kialoa and Greybeard, and met some new friends as well (Libby and Bo on s/v Ptarmigan, Annette and Mike on s/v Rum Doxy, Amy and Jim on s/v Millie J etc).  We also met a wonderful couple in an RV on the beach, Mary and Jim from Sacramento.  They were incredibly kind to us all.  They drove us into Mulege for supplies, made us dinner, and hosted several beach parties.  Thanks Mary and Jim for your friendship and hospitality.

My friend Libby from the Bay Area came to visit while we were in Concepcion.  We chose not to do any sailing while she was on board, but did move the boat to another anchorage in search of the elusive whale sharks.  We saw them up until the day she arrived, and then no more.  I guess the season is almost over for them as well.  Despite a lack of sea life (the snorkeling proved disappointing as well), we had a nice, relaxing visit.  We only tried to break her once (this seems to be a tradition when we get together for a trip).  Luckily she proved resilient once again.  Libby, I hope the knee fully recovers soon!


Based on a forecast of strong northwesterly winds starting at midnight, we’d expected to end the season off with a “sporty” sail across the Sea from the Baja side over to Guaymas on the mainland side. All my angst proved to be for naught though, as we ended up motoring most of the way across in calm, but lumpy seas (sadly the seas always seem to increase ahead of the wind…).  While the Captain wasn’t all that enthused about the trip, we made it without incident.  We are now enjoying Guaymas and are getting ready to put Sea Rover II on the hard for a much needed rest.