A Reminder of Why Most People Don't Sail Here - Part Two 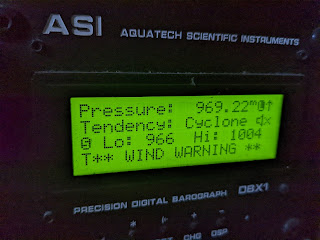 For our short trip this year we had hoped to loop around Isla Gordon and visit the glaciers in the North and South arms that lead into the Beagle Channel.  By January 1st it was clear that the weather was not going to cooperate with this plan as a series of strong lows were forecast to come through for the remainder of the week.  The first system was predicted to be a 961 millibar low. For those of you who are non-sailors, that is VERY big low and usually means you can expect very strong winds.  Our barometer was kind enough to tell us that a Cyclone was coming… The storm was expected to hit Tierra del Fuego on January 2nd.  The winds on January 1st were supposed to be light from the NE.  As Caleta Olla is not all that protected from the E, we decided we’d move 25 miles west to a small hurricane-hole anchorage called Caleta Cinco Estrellas.

We woke up on January 1st to the bump of us running aground in Caleta Olla when the wind switched  to the NE.  Oops.  Luckily it was a soft bump and pulling in 10 feet of anchor chain solved the issue.  But, feeling that this was a harbinger of things to come, we decided we’d pull anchor and head to Cinco Estrellas.  As I pulled the lines from shore, Gary pulled in some more of the anchor chain.  While we were sorting out the lines on deck, a big NE gust came and blew the boat sideways.  The anchor dragged and we found ourselves beam-to on the shore.  Crap.  Luckily the mud was soft and we were able to back off without difficulty.  But still.  It wasn't yet 7am in the new year and we’d already run aground.  Twice.

We finally got sorted and motored out of the cove. The channel just outside the cove was a sea of white.  Hmmm, this was kind of unexpected based on the wind forecast (NE 10 knots).  But on we went.  Once out in the channel, the wind started off from the NE, but we were immediately bucking into 3-4 foot seas on the nose.  Wind against current?  We continued on. Another 0.5 nm further along and suddenly the wind was 20 knots from the W, so directly on the nose.  OK, at least this explained the seas.  Regardless of the wind and waves, we were actually making decent speed (4-5 knots) so we decided to continue on.

Then the conversation in the cockpit went something like this:

Gary: Do you see that weird water thing over by the shore? What do you think it is?

Karina: No, I think it’s a waterfall spraying up in the wind.

And so it was.  For the next 2 hours we were hit by no less than 20 violent ‘rachas’ (ie, VERY strong 50+ knot wind gusts) in the form of visible water spouts.  If we’d stopped to really think about it beforehand we would have realized that NE winds would funnel down the glaciers on the north side of the channel and hit the water as violent wind gusts, aka rachas.  Rachas are a common phenomenon in Chile given the topography and typical wind strengths. We have spent our entire time in Chile so far avoiding anchorages reported in the guidebook to experience rachas.  And up until January 1st, we’d been mostly successful.  After January 1st though, I think we have experienced more rachas than most people in the world.

We had to pass three major glaciers over a 10 mile section of the channel, Francia, Italia and Allemande.  At the Italia glacier we went through a 15-20 minute stretch of being hit by 3-4 50 knot rachas, then got a bit of a break while we motored towards the next glacier.  At the Francia glacier, we experienced another 15-20 minute section of 4-5 50 knot rachas, then had another stretch of relative calm.  Not awesome, but manageable. Things cranked up a notch when we came the Allemande glacier, which is the biggest of them all.   The seas built to 7-9 feet and were coming off the north shore (versus from the expected direction of west) and hitting us directly on the beam.  The rachas were no longer showing up as water spouts on the water, but as huge curtains of flying foam.  Gary did his best to drive into them as much as he could, but we still got laid over on our side over and over and over again.  I counted 13 ‘squiggles’ on our GPS track while we passed this glacier, each representing a separate racha hit.  And most of them were in the 60+ range (our wind gauge doesn’t go any higher) and lasted a good 30-40 seconds.  It felt like it would never end.  Miraculously we didn’t lose anything off the deck, although our huge fenders were blown up from the water side of the rail and deposited on deck, and the BBQ was upside down.  And no, we don’t have any photos of the event.  We were too busy steering the boat, hanging on, and trying to calmly think through the series of things we’d have to do if (a) the steering failed at any point, (b) the engine failed, (c) the hard dodger and cockpit enclosure got ripped off.  All of these felt like very real possibilities while it was happening.

And then, just like that, we were through it and the seas were calm with a gentle breeze against us. It felt like we’d just run a gauntlet of dragons… but, we survived.  While the crew were shaken, Sea Rover was no worse for wear.


We made it into Caleta Cinco Estrella, our chosen hurricane hole and prepared for the storm expected the next day.  We anchored and tied 5 lines to shore (after the morning we’d had, we weren’t taking any chances).  I went for a small hike and explored, then we hunkered down for the ‘storm’.  As advertised, the cove really was bomb-proof.  We had the occasional gust during the storm, but nothing menacing.  It snowed, hailed and freezing rained most of the storm day so we hibernated on board.

The next day we decided it was time to head back towards Puerto Williams.  The wind was from the traditional direction (ie, W) so we were pretty sure that the dragons would keep to themselves through the now-dreaded glacier stretch, but we were wary of any thing moving on the water, ie, sun beams, mist etc.  Thankfully our passage was smooth.  We had a very fast sail in 30 knot winds (from behind) so we had at least 1 day to remember that we were a sailboat.  We ended the day in an anchorage on the Chilean coast across from Ushuaia that we were hoping would give us some protection from the strong winds.  Although the cove was protected from the big seas, it didn’t offer any protection from the wind and so we spent the next 48 hours being blasted by 40 knot winds to the point where neither of us could hear ourselves think.  Luckily we were able to get poor internet from Ushuaia so we could entertain ourselves by working or finding the end of the internet.  And thank god for noise cancelling headphones.  They were a last minute purchase on this trip but were sanity savers.

I made Gary get up early (4am) on day 3 in the anchorage as the wind had calmed down and I didn't want to miss the opportunity to go.  The entrance to the anchorage is very narrow, with pointy rocks on and kelp on both sides so it is easiest to navigate in calm weather.  It took us an hour to remove all the kelp from the anchor, but we were on our way back to Puerto Williams by 5am.  And wouldn’t you know it, we had wind on the nose the whole way here.  East winds are very rare in this part of the Beagle Channel, but this is the second E wind we’ve had in this stretch of water… Regardless, we made it back into Port in time to see our friends on Zephyros off on their Antarctic adventure.

Overall it was a good trip, but it has reminded us both how difficult it is to sail here, especially if you are trying to go west, which is of course the direction we have to go to get back north to Puerto Montt.  On the plus side, we’ve also been reminded how solid our boat is and know that she can handle whatever we are given.  We think we made the right choice not go north this year with such a short time window.  Our ‘plan’ is to sail north in the late winter/early spring next Sept-December, when the W winds typically
aren’t quite as strong.

Happy New Year to all.

Posted by Karina McQueen at 7:45 AM