A Reminder of Why Most People Don't Sail Here - Part One

After making the decision not to sail to Puerto Montt this year, we slowly started preparing Sea Rover for a short trip in the waterways of Tierra del Fuego.  We were pleasantly surprised that most of the boat systems seemed to be operating as expected.  We ran into an issue with our solar controller, but switching to new controllers solved the issue.  Even the watermaker seems to have come back to life.  We filled up with diesel, water, propane and food, and departed for a two week trip on December 23rd. It took 10 people and two dinghies to extricate Sea Rover from her spot deep in the boat raft at the Micalvi.  Unfortunately we don’t have any photos or video of the event as we were busy driving or fending our way out, but it was surprisingly undramatic.  It was a calm morning and so we expected to have a nice motor up the Beagle Channel.  Alas, as soon as we got out of the harbour the wind cranked up to 20 knots on the nose.  And so began our slow journey west… 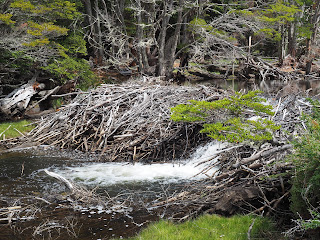 Our first stop was 35 nm to the west of Puerto Williams at a pretty anchorage called Caleta Liwaia, more commonly known in the sailing community as ‘Eugenio’, named for the sole resident of the large island called Isla Hosta where the anchorage is located.  Eugenio’s Estancia (ranch) is located a few miles to the west of the anchorage and we saw his cows and sheep grazing the lands around the anchorage daily.  We even had a sighting of Eugenio himself on horseback surveying his territory one afternoon.  The cove is beautiful.  It has a nice, protected spot to anchor and secure the boat (2 lines to shore), and has easy hiking.  We enjoyed poking around the ancient forests and looking for beaver dams, which were not difficult to find.  The beaver was introduced to this area in the 1946 as a source for the fur trade and they have wreaked havoc ever since. 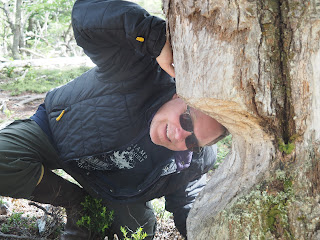 We saw evidence of them everywhere, although the only two we actually saw were being separated from their pelts on the deck of a neighbouring sailboat.  It is legal (and encouraged) to hunt beaver in southern Chile and one of the locals is an expert.  He offered us some meat, but we said no.  I’m not sure we, as Canadians, are allowed to eat our national animal… What surprised us the most was the size of the trees the beavers were working on.  Some of the holes they were had made were the size of Gary’s head!

After spending Christmas enjoying the solitude of the anchorage, we started looking for a weather window to move to the next anchorage 25 miles west.  On what we thought was a suitable day, we got up at 4am, untied the lines, pulled up the anchor and hacked off the kelp in calm winds and seas, and motored out of the cove.  Within five minutes we were beating into 15 knots on the nose.  Then it was 20 knots.  Then it was 25 knots.  Then the seas started to build and our speed dropped to 2 knots while motor sailing.  After making it 5 miles in 2 hours we decided to turn around and go back to the anchorage.  It was still calm in the caleta when we arrived, but no sooner had we dropped the hook than the wind started to gust to 30 knots – and continued to do so for the next 30 hours without stop.  We did a few more boat jobs, including rigging the staysail as we realized that we were going to need a different sail plan this year compared to previously.


The wind finally died down at about 4pm the next day so we decided to make a run for the next anchorage.  What a difference a day can make!  The channel was smooth and we had a nice evening motor, arriving in Caleta Olla just before dusk. Not surprisingly, we were greeted by a beaver while dropping the hook (2 lines to shore). We spent the next 5 days in Olla waiting for the next break in the weather systems which would allow us to continue west.  Despite being fairly open, the cove is surprisingly protected in strong (30+ knot) west winds.  There is a thin band of trees just off the beach that give an amazing amount of protection to the boats anchored just off the shore.  You can hear the wind in the rigging and you can see it hit the water in front of the boat, but no wind seems to hit the deck.  It was lovely.
While we were there we took the dinghy over to the far shore of the bay and hiked up the hills for a view of the Hollanda glacier and lake.  It’s mostly open marshy field and pretty muddy going, but we saw a guanaco (llama-like thing), had a close encounter with a Caracara (hawk-like thing), and watched three Condors soar in the thermals.  It was a lovely day.
As it was calm on deck, we decided to set up our sea kayaks in the hopes that we’d have a few opportunities to use them at some of the glaciers.  Our last day in Olla started off sunny and warm (in our cockpit enclosure) so we decided to take the boats for a spin.  It took us half an hour to find all our gear (gortex paddling jackets, wetsuit pieces, kayaking boots, paddles etc) and get organized.  In our preoccupation with getting on the water, we didn’t really notice the weather.  No sooner had we paddled 100 metres from the boat when a squall hit with 40 knot winds that literally drove us into the river mouth across the bay.  It was like a big hand just lifted us up and pushed us along.  I’ve never experienced anything like it.  One minute all was calm, the next (literally) I’m back-paddling for all its worth trying to keep my kayak pointed downwind in 2 foot chop with spray coming off the top.  Crazy.  Thankfully it was pushing us into shore (albeit shore with a steep sided mountain that separated us from the boat) instead of out to sea.  We surfed into the river and paddled up as far as we could go before the current was against us, then slid the kayaks into some reeds to wait it out.  There was nothing else we could do.  I was wearing wetsuit bottoms and a long underwear top under my paddling jacket and had at least brought a wool hat, but Gary was only wearing fleece pants and a t-shirt under his paddling top.  It wasn’t long before we were both wet and cold. After a half hour or so it seemed that the wind was down a bit so we paddled to the river mouth to check the conditions.  Nope.  Back to the bed of reeds.  At that point we decided we needed to get off the water and start looking for shelter as it didn’t look like the weather was going to improve.  We found a small divet in the field behind a small tree and started to take stock of what we had with us (a camera – sorry, no pics!).  It was at this point that Gary mentioned that we had forgotten our lifejackets… Agggghhhh!  Things were not going well.  After getting reasonably settled, we realized that the wind had dropped a bit.  Should we make a run for Sea Rover?  We felt we had to try.  We dragged the boats back into the river, Gary took me under tow (he paddles faster and didn’t want to wait for me), and we paddled for our lives.  It was still windy, but the waves were down and it was probably only blowing 20 knots vs 40.  We slowly inched our way up the steep sided mountain shore and finally reached the lee of the trees and the safety of the sailboat.  We dragged the kayaks on board, changed into warm clothes and drank a lot of hot liquid.  By the time we’d warmed up the sun was out (of course).  But, 30 minutes later, the same type of squall came out of nowhere and hit the boat again.  Happily this time we experienced it from the safety and comfort of our cockpit!

And so ended the tumultuous year of 2021.