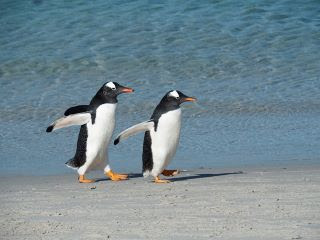 Well the first few days have been pretty successful on our quest to see the 8 possible Penguin species on land. Here on the Falklands we've seen the Rockhopper, Gentoo and Magellan Penguins. Funnily enough we've spent the past two years in Chile trying to see the Magellan Penguin on land. We've seen so many of them in the water where they moooo like cows but have always missed them on shore. Yesterday we hit the motherload and have now been able to check that box in spades.
We've got so many pictures but unfortunately we don't have great internet on board so you'll have to imagine the thousands of penguins we saw here in the Falklands. We'll post more when we get back to civilization.
The ship has kept us pretty busy with talks about wildlife, geology and even political commentary on the Falklands war. We've met people from all over the planet with the large majority of them taking a cruise for the first time. The only crisis we've had so far was when the ship was delayed bunkering today while we ashore exploring the town of Stanley. This two hour delay has become a scheduling nightmare for the kitchen staff which ensure a constant stream of food at 3 hour intervals... I'm not sure how people are going to manage having to eat lunch, afternoon tea and dinner all within 4 hours. Personally, I didn't find it a problem.
Posted by Gary and Karina at 6:27 PM