We have now arrived in port, but want to backtrack a bit and fill in some of our experiences over the last few weeks now that we have good internet and can post pictures.

After our night crossing of the Strait of Magellan we spent a few days waiting out weather in an anchorage just outside of the narrow pass that would take us further south and into Tierra del Fuego.  The anchorage was called “Caleta Hidden” and it was indeed a hidden gem.  It is a lovely bay with lots of bird life, including a new kind of cormorant (at least new to us) that we hadn’t seen before.  Unfortunately I saw it when we were going through the narrow, shallow, rock-strewn entrance and so I didn’t have a lot of time to watch it.  Our bird book identified it as a Rock Cormorant, but I didn’t get photos as the Captain kept insisting I pay attention to the depth and location of the kelp while he maneuvered us through the entrance.  Really, talk about priorities!

The bay itself was well protected from the wind, meaning that we only felt 15 knot gusts in the anchorage while it was blowing 25-30 knots outside in the Strait.  Despite having wind directly on the stern, our two shorelines never got tight, mostly because they were being weighed down by an incredible water slime that settled on the lines as soon as we’d put them out.  We’ve never seen anything like it.  It took us almost an hour to get the stuff off when it was time to leave and the exercise left both of us exhausted and with sore arm muscles!

The hiking in the bay was great, once you made it through the extremely prickly bushes and dense underbrush around the band of trees and into the more clear areas higher up.  The ground was largely spongy moss and so quite wet, but the moss itself held our weight while walking.  It was a bit like walking on a spongy cloud.  I’m sure there was ground under there somewhere, but we never saw it.  Things that looked like nice rocks when we were hiking up turned out to be an even bigger, spongy white moss.  Crazy.  It was great to get off the boat and use our legs again.  Plus the scenery was spectacular. 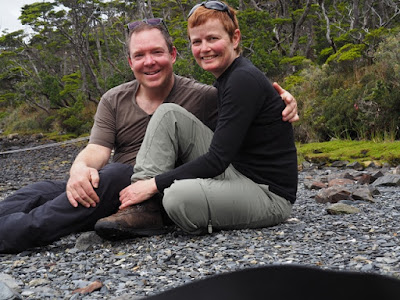 This was also the first anchorage that we shared with another boat.  It was here that we met the US flagged boat Zephyros, a couple our age with 2 boys aged 10 and 12.  They are a really nice family and we enjoyed playing games and getting to know them.

After 4 days in the anchorage the Captain was getting squirrely and decided it was time to move on.  Even though the wind was forecast from the SW, it wasn’t supposed to be that strong and so we decided we’d transit the narrow pass that leads to Tierra del Fuego and move to an anchorage 30 nm south.  We had variable winds in the pass – one minute it would be flat calm with no wind, then the next 30 knots from the NW, then 30 knots from the E.  And so on.  Annoying, but manageable.  Things got slightly more exciting when we got to the narrows itself.  The wind was blowing 25-30 knots directly on the nose.  We motored against it slowly, until we got to the narrowest part of the pass where there was a 100 m gap between a huge rock and an island.  At this point the current picked us up and we hurtled through the pass at 7+ knots!  There were a few tense moments while we tried to identify the rock amongst all the swirling water, but everything went smoothly once we knew where we were.  Times like that make us grateful that we spent years sailing in current-strewn areas in BC and the San Juan Islands.

Once through the narrows we motored to an anchorage called Caleta Cluedo, which was named by Cruisers who spent way too many days there playing the game Clue.  Little did we know that we’d also be occupying the bay for quite some time….  The bay itself is very pleasant.  It is surrounded by some reasonably high hills and has a lovely waterfall entering the head of the bay.  As with most of the anchorages in Chile, our guidebook recommended putting out an anchor and then laying 2 lines to shore so that the stern of the boat is tucked in close to the shore.  This is done to maximize the protection from the wind by any trees that may line the shore.  Typically you drop the anchor, then one person gets in the dinghy and rows a line to shore.  The person on the boat pulls in the line which pulls the stern of the boat gently into the shore.  This sounds good in theory, but anchoring this way in practice is much more difficult than it seems if there is any kind of wind blowing.  As this is Chile, the wind blowing is a given!

On this particular day we anchored in the middle with no problem.  I then got in the dinghy and tried to row to shore against a 15 knot headwind.  I rowed, and rowed, and rowed, and rowed, and very slowly inched my way up to the bay (while the Captain yelled out helpful suggestions).  I then got out and wrapped shoreline #1 around a good-sized tree.  As we weren’t sure our line was going to reach shore, I’d taken the whole line to shore with me.  The idea was that Gary would do his best to back the (anchored) boat into the wind (yeah, right), while I rowed the line back to the boat and got it on the back cleat.  We’d then pull the boat around from there.  Simple right?  Sadly, no.  Gary sort of managed to manoeuver the boat backwards towards the wind, and I did make contact with the boat, but I missed giving him the line and the boat floated downwind faster than I could follow in the dinghy.  We repeated this two more times with a similar lack of success.  Needless to say when we finally got the line attached the stern of the boat was 300 feet (which is the length of our line) from where we wanted it to be.  With the 15 knots of wind now hitting the boat broadside, there was no way that Gary could pull the boat into position by hand.   We’d need a mechanical advantage.  So, we attached another line to the shore line that we could use as a warp and Gary ended up winching the line in turn by painful turn.  About 45 minutes (and many sore muscles) later the stern was where we wanted it to be and we could finally attach shoreline #2.  We then realized that the bay was more shallow and rocky than we’d originally thought.  As a NW wind (which was predicted overnight) would push us sideways into the bay and possibly into the shallow, rocky bottom, we decided a second anchor off the side of the boat was required.  While relatively easy to deploy it took time (did I mention it was pouring rain this whole time?).  A mere 2.5 hours after getting the anchor down the boat was in place and secure.  We were wet.  And cold.  And hungry.   And grumpy.

Our original plan had been to stay in Cluedo overnight and then continue into Canal Brecknock, and Tierra del Fuego proper the next day.  As this involves a short open ocean crossing that is known to be potentially nasty and the weather window looked questionable the next day, it didn’t take much to convince us to stay in Cluedo for the next forecast weather systems to pass through.  So we spent the next 5 days hunkered down waiting out the bad weather. The anchorage was protected from NW winds, but not really from the SW and W.  We had 35+ SW and W winds hammer us for 24 hours on our last day.  With 3 shorelines (we’d added an extra the day before the big blow) plus 2 anchors we weren’t going anywhere, so we just enjoyed the solitude (if you can imagine solitude with wind loud enough to drown out speech on board).

I got a lot of work done and we managed to do two hikes in between the rainstorms.  All and all it was a quiet week.  At the end of the 5 days though we were definitely ready to move on.