After another great night sail, we arrived in the very busy harbour off of Puerto Ayora on Isla Santa Cruz at first light last Tuesday.  It was shocking to see so many cruise boats, tour boats, taxis and ferry boats after the tranquility of Isla Isabel.  We threaded our way through the nautical chaos and squeezed ourselves in between several boats.  We quickly realized we were going to need to set a stern anchor as the anchorage was very rolly and uncomfortable.  As the dinghy was still on deck, we put the paddle board in the water and deployed our stern anchor from there.  Our first attempt brought us too close to a local boat and we got to have our first “conversation” with a local… Oops.  The second attempt was better, but we quickly realized we needed to add chain to our all-rode anchor line so that it wouldn’t get run over by the ten thousand boats zipping by at full speed.  The dinghy was deployed, the stern anchor was pulled up, our link of chain added, and then sunk again.  Third time lucky. The officials showed up at 9 am to clear us in.  One of our agents was there, so all went smoothly.

Puerto Ayora seems like a major metropolis compared to the other two islands, but it is still a small town.  We have spent our time here wandering around and exploring the town, in between getting the boat ready for our next passage. 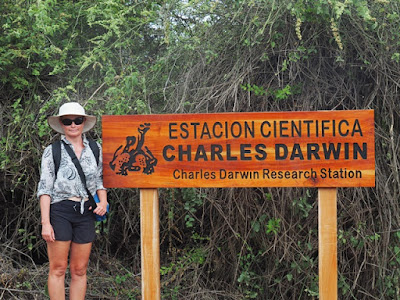 We’ve swum in the brackish waters of a lovely grotto a 15 minute walk away, and spent a nice afternoon visiting the turtles and land iguanas at the Charles Darwin Research Center. We also did a snorkelling day tour out to Isla Pinzon and saw many many many sea turtles (we lost track after 30), sharks, sting rays and a couple of sea lion colonies.


On the way to the snorkel spot we stopped and admired a beach just full of marine iguanas.  A great day.  The next day Nadine did a day scuba diving trip and swam with hammerhead sharks.  Another amazing Galapagos experience.

Gary announced that we had to eat out as much as possible while here as we’ll be eating on board for the next 2 months.  So, we’ve been trying out the local cuisine.  We’ve eaten some great empanadas, found a brew pub with good wings and coconut encrusted shrimp, and eaten a couple of times in the “food alley” area.


They close an entire street down every night and set up tables in the middle of the road and all the restaurants that line the street then vie for your patronage.  We had a great meal of Brujo (a type of grouper that is very popular here) one night, and a nice Mexican meal last night.  We’ve also eaten a lot of ice cream.  Sometimes two a day…


And after being the only Cruising sailboat in the Galapagos (and only the second all year) we finally met some other Cruisers – Fourth  Quarter, a Peruvian boat being run as a charter, and a lovely family (plus paying guest crew) on the beautiful catamaran Elcie, which they built themselves.  Elcie will be sailing to Easter Island at the same time as us. 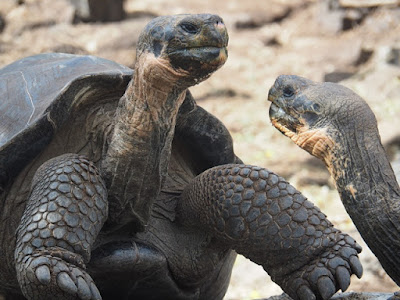 Luckily for us they’ve been there before so we’ve been able to pump them for information on anchorages (generally poor – pray for calm weather), provisioning (generally poor as everything gets shipped from Chile), weather (will hopefully be good??!) etc.
They are on a tight schedule and can travel much faster than us, and so they may be gone before we finally arrive in Easter Island, but hopefully we’ll overlap there for a few days.  It has been a bit lonely being the only Cruising boat for the last few weeks and I know Gary has missed sharing stories and information with other sailors.  However, there have been a lot of advantages to being here early in the season.  We haven't had to compete for the prime anchoring spots, and you can just tell the water taxi that you want to go out to the sailboat - makes it pretty easy when there is only one!  But, it is always re-assuring to know that we aren't the only crazy people doing the trip this year.